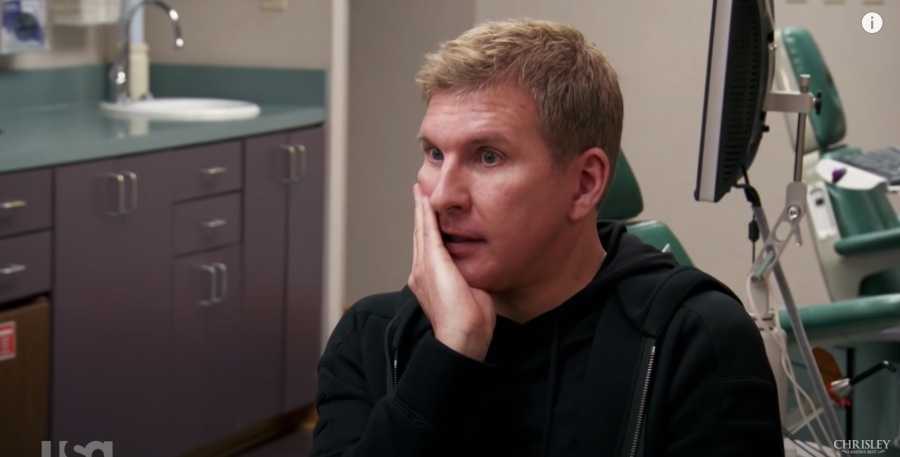 From the looks of it, the Chrisley family social media accounts are gearing up for the Season 9 premiere of Chrisley Knows Best. Fans have been anxiously awaiting this news, and the time is finally here. New episodes of Chrisley Knows Best and Growing Up Chrisley premiere Thursday, August 12th. In the meantime, what has Todd Chrisley scowling in a recent post on the Chrisley USA Instagram account? Keep reading to find out what fans speculate.

There’s no denying that Todd has his signature scowl going on in a recent Chrisley USA Instagram photo. Unfortunately, the caption doesn’t give any clues about what is going on. However, it does open up the comment section for some hilarious responses. The caption reads as follows. “If @toddchrisley is looking at you like this, what did you do?”

So, one option is that Nanny Faye is up to her shenanigans. Anyone that’s seen an episode of Chrisley Knows Best knows that Todd is fiercely protective of his mom. There are several instances where he shoots his mom a look similar to what’s seen below. Fans seem to think the same thing. One of them comments, “Nanny Faye or Chase did something.” Which wouldn’t be surprising, TV Shows Ace regularly reports on Chase and Nanny Faye’s shenanigans. Recently, the duo went to the Kentucky Derby and Chase caught Nanny smoking a big ole cigar pretty early in the day.

Did Chase do something?

The fan may be on to something, it wasn’t too long ago that Chase pranks his dad by throwing a toy snake at him. One fan writes, “His talk to chase after He threw the snake at him. Still laughing.” Another thing that Chase could do to get this look is taking clothes out of Todd’s closet.

Other things fans think could get “the look” are listed below.

One fan says it best in their comment. They write, “I don’t know but at the end….He loves you.” We’d love to read your response about what you did if Todd Chrisley is looking at you like this. Let us know in the comment section below. Check out new episodes of Chrisley Knows Best and Growing Up Chrisley on USA Network Thursday, August 12. Come back to TV Shows Ace for more Chrisley Knows Best news.