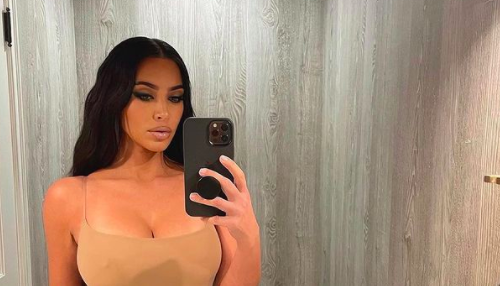 Kim Kardashian posted a photo on Instagram and fans are going wild. The photo she shared is a throwback photo where the star is posing in daisy dukes. What will she post next?

Kim posted on Instagram and fans are going wild. The star is rocking some daisy dukes. The shorts are honestly barely there, they are so short. Not only that but they are unzipped showing off more of her body. On top, Kim is wearing a tiny black bikini top.

She finishes the look off with red cowgirl boots and a tan hat. In the first photo, she is laying in the sand, it appears she is in a desert. Then, in the next one, she is walking seductively towards the camera.

In the caption, she reveals the this is actually a throwback photo. Apparently, they are from 2008.

A lot has changed with Kim’s brand since these photos were released. There’s no telling quite why she posted them. Could it be because she’s rebranding back to just Kim Kardashian instead of Kim Kardashian West? Hopefully, time will tell what’s going on with her.

In the meantime, Kim has been having a lot of fun on her Instagram account. She is constantly sharing bikini photos with her followers. However, these are a bit different than her daisy duke days.

Most recently, she shared a photo of herself in a lavender bikini. The star is sitting on a stripped boat showing off her long hair on the water. She is flaunting her tiny body per usual looking great while doing it.

“Don’t get too busy making a living that you forget to work on making a life- Dolly Parton. Friendly reminder to always take a little time for yourself,” she writes in the caption.

Apparently, this post resonated with the person that said it.

This caused more of the Kardashian family to get involved with excitement.

Did you see Kim Kardashian’s post? Let us know in the comments below. Come back to TV Shows Ace for more news on all of your favorite Keeping up with the Kardashians stars.

‘Below Deck Med’: Is Lexi Wilson Engaged? Malia White Spills The Tea
Are Kim Kardashian & Kanye West Co-Parenting Successfully?
Derek Hough Dishes On His Relationship With Hayley Erbert
Would Michael Allio Accept An Offer To Be ‘The Bachelor’ Next Season?
OH NO!!! Jessa & Ben Seewald Are Hurting For Money After Giving Birth?!