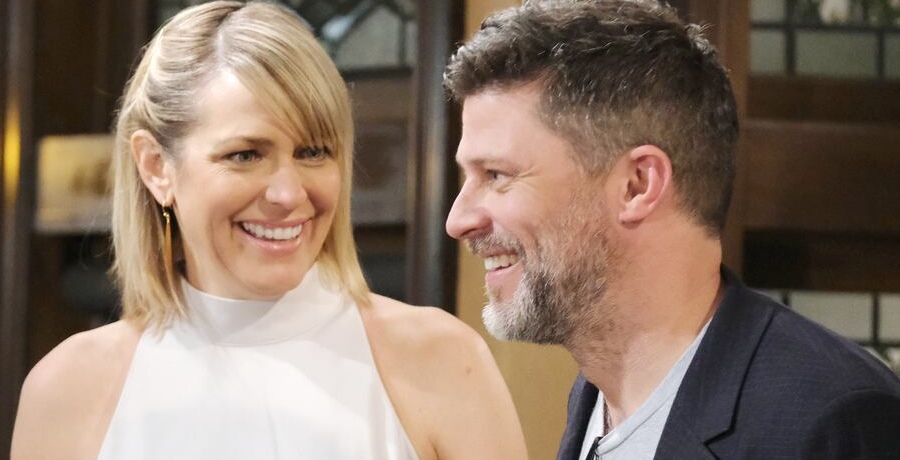 Plus, Lucas Horton (Bryan Dattilo) and his little brother Philip Kiriakis (Jay Kenneth Johnson) have their own reasons for their plans to implode Sami Brady’s (Alison Sweeney) marriage to EJ DiMera (Dan Feuerriegel) on the NBC soap.

Days of Our Lives spoilers recall Lucas Horton recently confided in his brother Philip Kiriakis about his feelings for his ex-wife Sami Brady. While Lucas had this heart-to-heart with Philip, Chloe Lane (Nadia Bjorlin) overheard the sorted details. Of course, she wasted no time in running that juicy tidbit back to her bestie Nicole. Now, Nicole has confirmation about her suspicions but still lacks real tangible proof.

Days of Our Lives spoilers say Eric and Nicole’s anniversary party will be a typical Salem party. That, of course, means they’ll be an abundance of drama. DOOL spoilers say the reunited couple’s party will have long-lasting repercussions from the bombs dropped. Sami Brady makes a bold accusation after she makes a deal with Xander Kiriakis (Paul Telfer). Finally, she has the goods on her lying, cheating sister-in-law.

Days of Our Lives spoilers reveal Eric Brady confronts his wife about the allegations she slept with Xander while he was off in Africa. Nicole is blindsided to be outed so publicly. Recall, she made Xander a deal in exchange for his silence. However, Sami upped the anti, and true to his form, Xander turned on Nicole. Will Nicole resort to lying to her husband? After all, she certainly can make a claim that who in their right mind would believe anything Xander says.

In the latest #DAYS, Ciara tries to get Ben to sign the divorce papers. https://t.co/glfM87FsAl pic.twitter.com/mZCJ8shnwo

Days of Our Lives Spoilers: Time Is Not On Ben’s Side As Ciara Prepares To Be Theo’s Bride

Days of Our Lives spoilers remind although Ciara is married to Ben, she’s engaged to Theo. Now she’s returned to Salem with Theo with the sole objective of getting Ben to sign off on their divorce. However, Ben is not going to give up his wife without a fight. He’s willing to do just about anything to get Ciara to remember their love. Also, Ben has the full support of all of Ciara’s family. Only Theo’s family is for this marriage. Ciara’s family and friends are 100 percent Team, Ben. In fact, her cousin and maid of honor at her wedding to Ben, Allie Horton (Lindsay Arnold), goes to great lengths to help Ciara remember her wedding day and the love she and Ben share.

Days of our Lives spoilers say Ciara is starting to regain her memories. However, she’s fighting hard to forget Ben ever existed in her life. Will she regain her memories before she weds Theo? Perhaps her wedding day to another man might be what actually brings all her memories of Ben back on the NBC sudser.