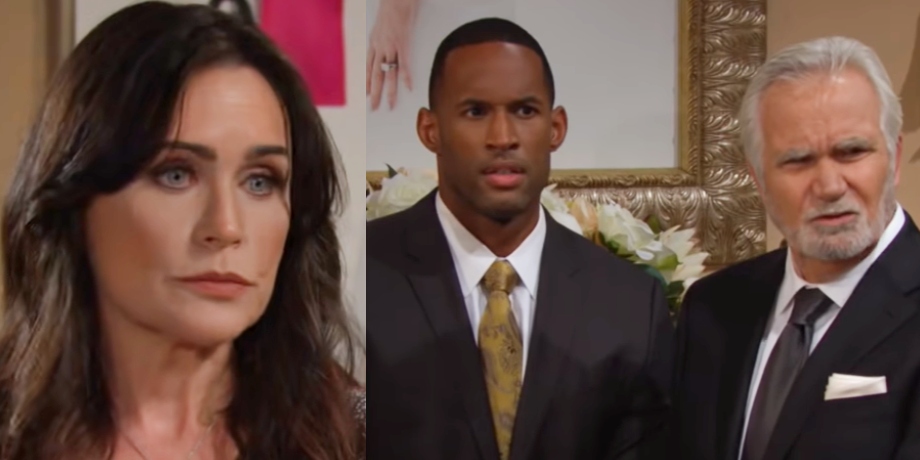 B&B spoilers hint that another “Who’s the Daddy” storyline could happen. As fans know, this type of plot is common as long as there’s infidelity and a love triangle. Currently, Quinn Fuller Forrester (Rena Sofer) is in shambles. Her husband, Eric Forrester (John McCook) kicked her out of his mansion upon learning that Quinn and Carter Walton (Lawrence Saint-Victor) hit the sheets.

Apparently, the two can’t resist each other. They continue to act on their desires. That means Quinn could end up pregnant because of her latest romp with the soap hunk. However, this could turn into a “Who’s the Daddy” storyline since she’s still desperate to get Eric back despite her sexual weakness. Quinn can’t have it all, but she’ll do whatever it takes to make sure she does.

Quinn is currently seeing her life crumble all around her. The world that she worked so hard to build is now gone. She ends up back in Carter’s arms and his bed. The B&B spoilers are speculating that Quinn could end up pregnant because of her ongoing affair with Carter. Their passion will take to new heights and will team up our TVs this summer.

Quinn’s love life could end up in a hot mess. She may find herself hopping back and forth from Carter’s bed to Eric’s bed. As fans know, Quinn was the one who helped Eric get the spark back in his love life. She didn’t do it with honey, but with whips and black leather.

This time, it could take a little convincing. Quinn might have to get Eric drunk, so they end up in bed together. Or, she could convince him into thinking that they did the deed. She could come up with this elaborate plan upon learning that she’s pregnant.

She will worry about the baby’s paternity. Obviously, Quinn still loves Eric and wants him back in her life. The added perks don’t hurt either. Her love affair with Carter won’t last for long. For the duration of her pregnancy, she’ll try to find a way to win him back.

Quinn’s love of money and power catch up with her

The B&B spoilers also suggest that Quinn will have to fess up and tell the truth. It could most likely be Carter’s baby, but it could be the Forrester kin she desperately wants. Quinn’s love for power and money will eventually catch up with her. She’ll have to deal with the mess that she created.

A baby could be what she needs to win Eric over. He won’t stay mad at her forever when he finds out that she’s having his future child. On the other hand, Carter is good-looking, smart, and successful in his own way. Plus, he’s kind and knows how to love Quinn in a way she’s never been loved before.

They sure have chemistry. The spoilers previously hint that the pair can’t deny their chemistry. Carter has not expressed an interest in becoming a father. However, this could all change when he learns about Quinn’s pregnancy.

B&B fans wonder if it’s possible for Quinn to get pregnant. Wyatt Spencer (Darin Brooks) is her only child. Quinn may struggle with her pregnancy due to her age. The spoilers reveal that she may avoid taking any tests.

Wouldn’t it be better to learn about the baby’s paternity as soon as possible? Not unless Quinn wants to convince her husband that it’s his. Carter’s lust for Quinn could turn into obsession as she tries to win Eric back. Nonetheless, it will be a complicated situation.

The Bold and the Beautiful airs weekdays on CBS.