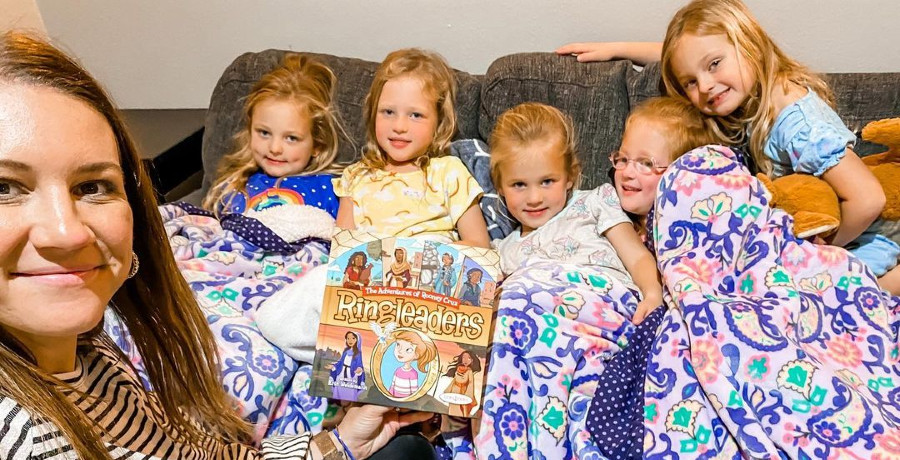 It’s hard to have a baby in the family if five of the kids were born on the same day. But one Busby quaint holds a special place in Danielle Busby’s heart. The OutDaughtered mom-of-six gave a shout-out to the “baby baby” in the family. Why did Danielle give Parker that nickname?

What’s So Special About the Busby Quints?

OutDaughtered debuted on TLC in 2016. The show followed Danielle and Adam Busby as Danielle gave birth to quintuplets. The couple also has an older child, Blayke. She just turned ten, and the quints are now six.

After eight seasons, viewers still flock to OutDaughtered. It remains one of the network’s most popular shows. But lots of people have larger families than the Busbys. What’s so special about the quints?

At the time of their birth in 2015, they were the first all-girl set of quintuplets born in the United States.

Fans joke that Danielle Busby actually has seven kids, eight if you include Beaux the dog. The miniature French bulldog was recently rushed to the vet after not feeling well. However, it seems he made a quick recovery.

Adam Busby shared an adorable video on his Instagram Story of Beaux zooming around the driveway. But he wasn’t alone. He was riding shotgun on a go-kart driven by Danielle.. The Busbys got the girls the fun go-karts from Razor Worldwide, which Adam tagged in the video.

It looks like Beaux and Danielle didn’t win the race, but even Beaux was having a great time.

Danielle Busby has been accused of playing favorites in the past. Fans of the show certainly seem to favor one quint over the others. But in a recent Instagram post, the OutDaughtered matriarch pays tribute to the baby of the family.

She describes her baby as her “blue eyed, adorable freckles, full lips baby baby.” Well, that could be just about any of the five quints except for Hazel. In fact, fans often can’t tell twins Ava and Olivia apart.

Danielle Busby is talking about Parker Kate, nicknamed PK. Why is PK her “baby baby?” Because she was born last of the quints.

Romper reports the birth order as the following: Ava, Olivia, Hazel, Riley, and Parker. Did you know PK is known as the “baby baby” of the Busby family? Head down to the comments and chime in.

TLC has yet to announce if there will be a Season 9 of OutDaughtered. Check back with us often for updates on the Busbys and all your favorite TV shows.

‘My Feet Are Killing Me’ Season 3: Release Date, What We Know
The Mystery Behind Erika Jayne’s Mascara-Stained Tears
No Longer Boy Crazy? Scheana Shay Gets The Life She Wants
Katie Morton Admits Mixed Feelings About Colton Underwood Coming Out
How To Watch Jessa Seewald’s Birth Story For Baby Fern