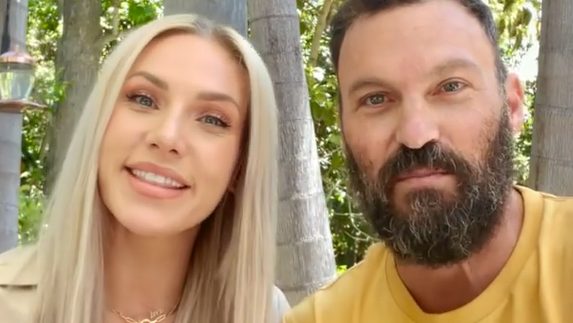 Brian Austin Green and Sharna Burgess were supposed to compete together on Dancing With The Stars Season 29. But if you watched last year, you probably remember that Sharna competed with Jesse Metcalfe instead. Green had to drop out, and the rest is history.

Jesse Metcalfe and Sharna finished in 12th place out of fifteen couples. The dancer really feels like things ended up exactly how they were supposed to be. She adores Green, but feels glad he never competed on DWTS with her.

“It’s definitely better that Brian wasn’t my dance partner on Dancing With the Stars because I don’t ever get romantically involved with my partners,” the dancer told Parade. “For me, that is business; it’s work. It’s my passion. I want it to be perfect. And I think those that sometimes get personally connected in ways others than dance and friendships, it can overcomplicate matters. And so, I like to do a good job, and the dancing comes first.”

This is definitely interesting news to hear. When Sharna revealed she had a new boyfriend last year, many suspected it was actually Jesse Metcalfe. Even though the pair didn’t make it past week 5, everyone thought they had amazing chemistry.

A mutual business manager introduced Brian Austin Green and Sharna Burgess eventually. They’ve been together for about 11 months now. These days, you can catch Green as a judge on The Masked Dancer. And hopefully, Sharna will come back for Dancing With The Stars Season 30.

ABC won’t announce the official cast list until late August or early September. However, most professionals really want to come back. The network famously cut Sharna from Season 28, even though she won the previous year with Bobby Bones. She was very excited to have another chance in Season 29.

In the interview with Parade, Sharna Burgess admits she hopes it will be an All-Star season. Since it’s Season 30, ABC probably has something pretty big planned.

” I would love to have an All-Stars season again, because selfishly, I would like James Hinchcliffe to come back so we can try and win this time. But I think that over the years there have been so many incredible and wonderful personalities that it would be great to see some of them again, to look at the last 30 seasons of Dancing With the Stars and how far it’s come,” the dancer said.

Parade asked about her favorite partner, and she admitted that it’s really hard for her to choose. She did list Bobby Bones, James Hinchcliffe, Nick Carter, and Noah Galloway as some of her favorite partners though. If Sharna got to choose her dream partner for Season 30, she’d really like to perform with Hugh Jackman or Channing Tatum.

Will you tune into Dancing With The Stars Season 30? Be sure to let us know in the comments. We love hearing from you.