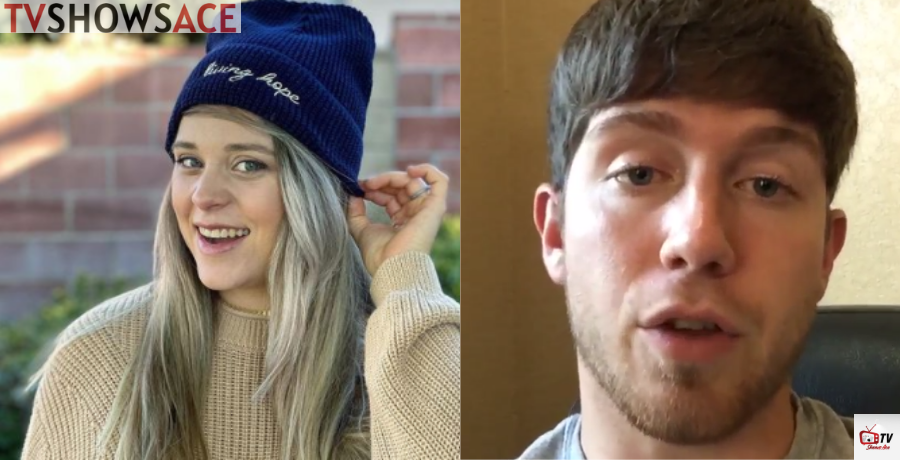 In her recent book, Jinger Vuolo opened up about her dating history and the inner mechanics of dating within the Duggar Family. She reiterated a lot of this information during a recent podcast with host, Jeremy Fall. Unfortunately, the young Duggar may have started some drama among the ranks with her commentary. Read on to find out which family member Jinger might have thrown under the bus.

During her interview, Jinger tells Jeremy Fall about what it was like to grow up Duggar, especially as a young woman. The 27-year-old recalls a time when she and her sisters would receive letters in the mail quite regularly. Most of the correspondences came from grown men interested in courting them. Many were marriage proposals sent from prison inmates. Jinger revealed that while the letters would occasionally be addressed to the girls, sometimes they were sent straight to their father, Jim Bob Duggar.

Vuolo mused afterward, however, that stranger than proposals from inmates  were the men who would come visit their church in hopes of landing a date with a Duggar daughter.

According to this Duggar daughter, men would travel from near and far to get the girls’ attention. They would attend the church as ‘visitors’ or under the guise of passing through or potentially moving to the area. Monsters and Critics reported these men would visit the church as a way to get their foot in the door with Jinger’s family. The would-be suitors hoped they might get the chance to woo one of the sisters.

“There were a lot of guys who came around, sometimes they would come visit the family or visit our church—that was a good ‘in’ for some guys. They thought, ‘Oh if I come to your church, that’s my in.’” – Jinger Vuolo

The tone of Jinger’s interview answers left fans with the impression that she was a bit skeeved when it came to how men would approach them when they were younger. Understandably so. These young girls spent the majority of their lives under a microscope. The whole world knew who they were before they themselves knew who they were. Looking back, it’s reasonable to think these girls might think they were preyed upon by these creepy ‘visitors’.

She describes the experiences as being ‘bizarre’ talking about how these boys would suddenly just show up. According to The Sun Jinger remembers there not really being any real ‘relationship’ aspect before the courtships would begin. They would show up, make friends with a few church members or get friendly with her Dad, and then approach him with an interest in a specific daughter.

Jinger may have accidentally stuck her foot in her mouth.  After all, being a ‘visitor at church’ is how her sister, Jessa met her now-husband, Ben Seewald. The pair have been married for nearly 7 years. Jessa met Ben in 2013 when he visited their congregation in Springdale, Arkansas. At the time, Ben lived with his parents in Hot Springs, Arkansas — over 200 miles away.

So how did it come to be that Ben was in the right place at the right time? Well, during various interviews over the years, Ben says that he was in the area on ‘vacation’. Supposedly, he was making the trip to check out the University of Arkansas at Fayetteville. He was just finishing a degree at his local community college and was considering applying to the University. Oddly enough, Ben would never go on to attend that school. Instead, the now father of 3 ended up moving into a warehouse on the family’s property and got a job working for Jessa’s father. They began their courtship in 2013 and married in 2014.

“The relationship side of things wasn’t even there, it wasn’t like ‘Oh look, I’ve been hanging out for a while and get to know your family and then we’ll see if anything happens.’ They would say to my family, my parents or something, ‘Oh yeah, I’m so interested in your daughter.” – Jinger Vuolo

Did Jinger Throw Shade at Her Sister’s Husband?

Obviously, Jinger didn’t point fingers or say any names during her interview. There was enough information spilled, however, to lead fans to believe that she was referencing (at least in part), her sister’s courtship with Ben. While yes, their situation worked out – it doesn’t take away from its unusualness.

Were the similarities in the story a coincidence or, did Jinger intentionally take a jab at Ben Seewald? Tell us what you think in the comments.

Stay tuned to TV Shows Ace for all the latest on your favorite reality TV stars and shows.

‘Prison Break’ Wentworth Miller Reveals Autism Diagnosis, Overwhelmed By Support
Would Michael Allio Accept An Offer To Be ‘The Bachelor’ Next Season?
Amy Roloff & Chris Marek Accused Of Weight Gain Prior To Wedding
Whitney Way Thore Fulfills Childhood Dream – See Photos
How Many Episodes Are In ‘When Calls The Heart’ Season 9?