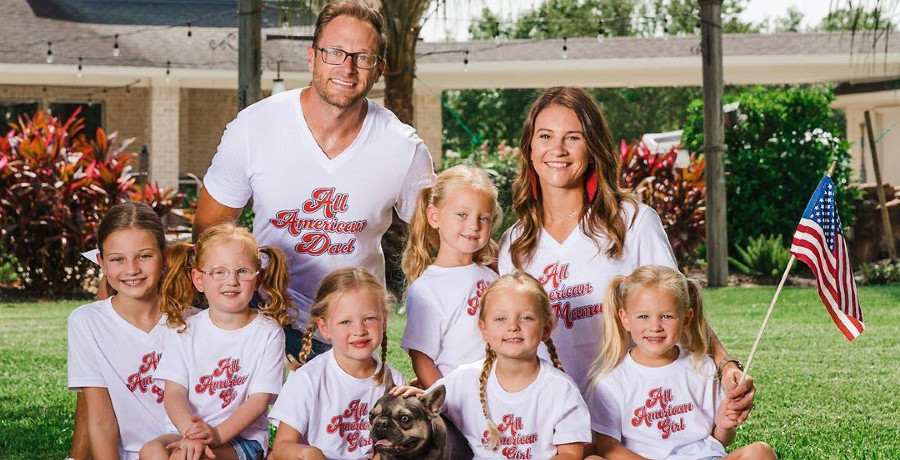 Danielle and Adam Busby are raising six strong, independent girls. Oldest daughter Blayke and the five quints all have their own unique personalities. In a Fourth of July selfie, Danielle reveals which of the quints is her “firecracker.” Do you have a guess?

The Busbys LOVE the July 4th holiday. They went all out this year. Danielle’s sisters joined the festivities, including ‘Aunt Kiki’ and her family. In fact, because of Kiki, Danielle was a day late posting photos from the epic get-together.

The OutDaughtered stars even rented a huge water slide for the kids. That left the pool free for the adults. They played a competitive game of volleyball. Danielle Busby shared a clip of the game on her Instagram Stories.

The Busby girls are living their best lives this summer. Blayke and some of the quints went to cheerleading camp.

Hazel stayed home with Adam, but had her own adventures.

Then the quints went to Invention camp while Blayke went to Bible camp. Since the pool at the family’s Texas home needed repairs, the whole family booked it to Lake Charles. There, they spent time with Adam’s parents and the girls enjoyed their grandparents’ pool.

Riley got a little sassy when her mom tried to show her how to dive into a pool.

Hazel Busby was more receptive to mom’s advice, but still flopped. As fans know, Riley Busby is quite the tomboy. In fact, she was rushed to the hospital earlier this year after taking a spill in the bathtub. People reported at the time that Riley was the first quint to need a trip to the ER.

It can be hard to spend one-on-one time with six daughters. However, Danielle Busby goes out of her way to make sure each of her kids gets their own time with her. She shared a photo on her Instagram with the daughter she calls the “firecracker” in the family.

As you may have guessed, it’s none other than Riley Busby!

Do you agree with Danielle that Riley is the family’s “firecracker”? Is it wrong for viewers to play favorites with the quints? Share your thoughts in the comments below.

Check back with us often for updates on a possible Season 9. TLC has yet to announce if the show will return for another season.

How To Watch Jessa Seewald’s Birth Story For Baby Fern
‘My Feet Are Killing Me’ Season 3: Release Date, What We Know
‘Bachelor In Paradise’ Newlyweds Expecting Honeymoon Baby
‘When Calls The Heart’ Season 9 Has Started Filming: All The Details
Rachael Kirkconnell, Matt James Spend Cute Weekend Together