As seen throughout previous seasons things slip. Things get said on social media or pics and videos leak out. Bachelor Nation is pretty die-hard when it comes to spoilers and figuring out who wins. Since the entire season has been filmed in one location, spoilers for Reality Steve have been harder to come by. So, fans dig and they dig deep. Now, a comment has been shared on a TikTok about Blake Moynes that has many wondering if it’s a hint or a slip. Warning!!! Huge Spoilers Ahead.

A TikTok was created about Blake Moynes that is a brief video of him turning around smiling to meet Katie Thurston for the first time in person. The caption says, “Blake showing up to date the third Bachelorette back to back.” Then, the caption of the video shared on Instagram read, “🔊sound on🔊 We can’t get rid of Blake but we ain’t mad about it.”

So now the question remains, did Emily just give away the ending? This comment could of course go two different ways. One it could mean that poor Blake just keeps on trying. Or, two, it could mean that Blake finally wins the girl. Fingers crossed it’s the latter! 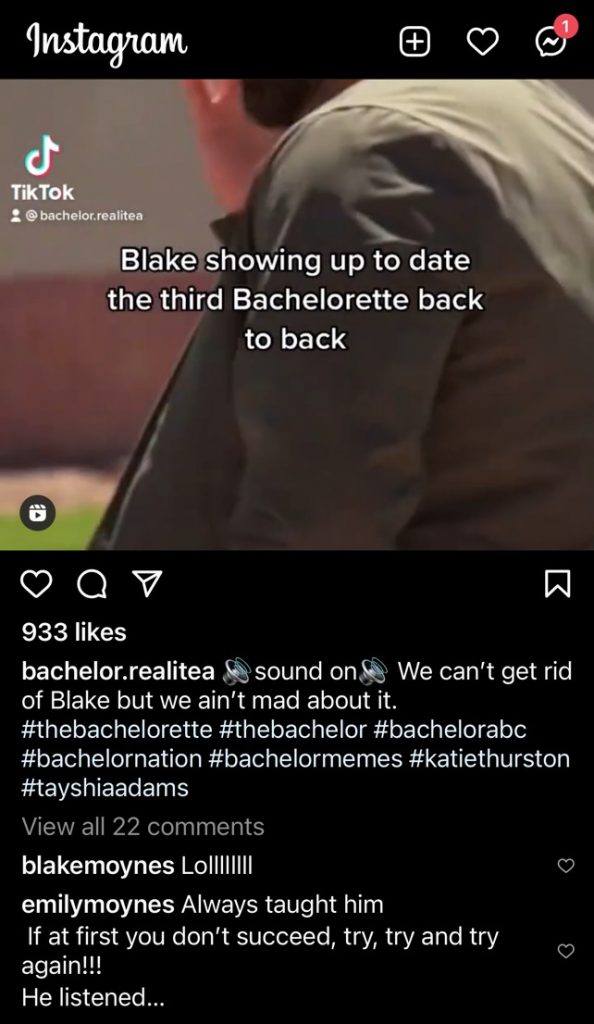 Hopefully, this is confirmation that Reality Steve is correct with his predictions and spoilers. He recently dished that Blake does in fact win. He even said Blake and Katie are engaged. Remember, Blake already told Katie that if he makes it to the end he’s ready to propose. He truly believes they will hit it off and connect.

Tonight, fans will finally get to see more of Blake and Katie together. Last Monday ended with Katie telling Blake she did feel a connection and wanted him to stay. The episode ended with Blake getting locked out of the hotel room wearing boxers and a smile.

What do you think about Blake coming onto the show? Are you still rooting for another guy to win her heart? Or, are you team Blake and Katie?

Tonight a brand new episode will air on ABC. Don’t miss The Bachelorette Mondays on ABC.