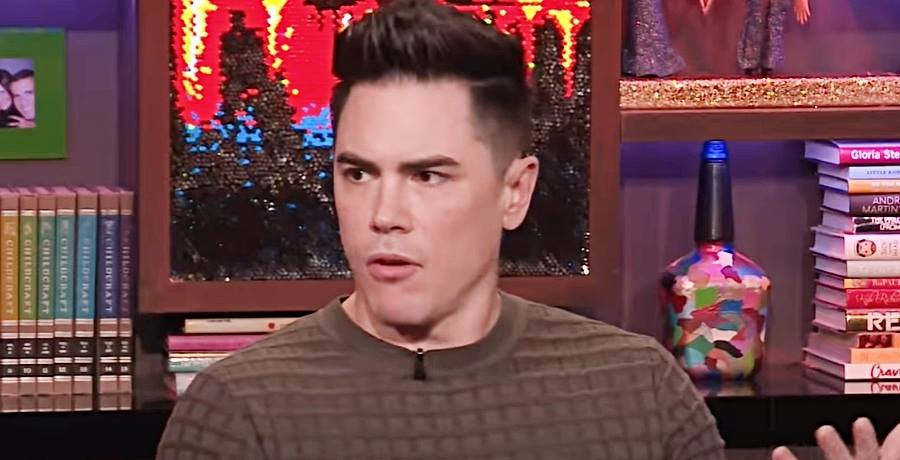 Tom Sandoval found a new best friend. As fans know, Sandoval is no longer friends with Jax Taylor. Their friendship had a falling out during Vanderpump Rules Season 8. Sandoval took to Instagram to share a new photo of his best friend.

This comes several months after Jax Taylor and his wife Brittany Cartwright left the Bravo reality show. Vanderpump Rules Season 9 has resumed filming and will debut this fall. While Sandoval will always have his friend Tom Schwartz he found someone else to replace Jax Taylor. Read on to see who he’s been caught hanging around with.

Tom Sandoval hangs upside down with his “real friend”

Jax Taylor is no longer the “number one guy in the group,” that now goes to Tom Sandoval. On Thursday, July 1, he posted a photo of himself at the gym. Sandoval hung out upside down on an exercise machine. Meanwhile, Scheana Shay’s boyfriend Brock Davies stood confidently next to him. Sandoval looked like he was struggling, but he made it clear that Davies was the “real” friend that he never had.

“Real friends don’t leave u hangin!” he wrote in the caption.

He also included shady hashtags such as “New Bestie,” “Out with the old, in with the new,” “new partners,” and “partners in crime.” Over 14 million fans loved Sandoval’s post, including his girlfriend Ariana Madix. Apparently, she approves of their newfound friendship. It makes sense since Ariana is best friends with Scheana.

Pump Rules fans flocked to Sandoval’s post. Most of them enjoyed the shadiness of his post. Others loved seeing the two men hang out together. Fans approve of Jax Taylor’s replacement. Here are just some of the comments:

One fan was concerned that Davies could replace Tom Schwartz. They weren’t ready to see the end of that bromance. “Are you cheating on Tom Schwartz? You two better still be friends! I’m not sure I could handle that breakup.” Other fans agreed, but it’s clear that Sandoval was talking about Taylor.

Both Jax Taylor and Tom Schwartz have moved on

Jax Taylor doesn’t care about the end of his friendship with Tom Sandoval. He has moved on from the show and his past. He’s been spending a lot of time with Lala Kent’s fiance Randall Emmett. He’s even worked for the Hollywood producer.

In the meantime, Schwartz has been hanging out with his Vanderpump Rules co-star James Kennedy. Shortly after Sandoval shared a photo of his new friend Davies, Kennedy posted a new photo of himself with Schwartz in front of a DJ booth. “The next real duo…” he captioned the photo.

In true James Kennedy style, he gave the camera the middle finger. Was this a response to Sandoval and Davies? “If you confused about this post go peep Sandoval’s last….” Kennedy wrote in the comments. Katie Maloney simply wrote, “I love mess.”

Some fans think Schwartz is betraying Sandoval by hanging out with Kennedy. However, both men are good friends with the British export. Fans will have to find out if there’s any drama between these fellas. Vanderpump Rules Season 9 is currently in production.