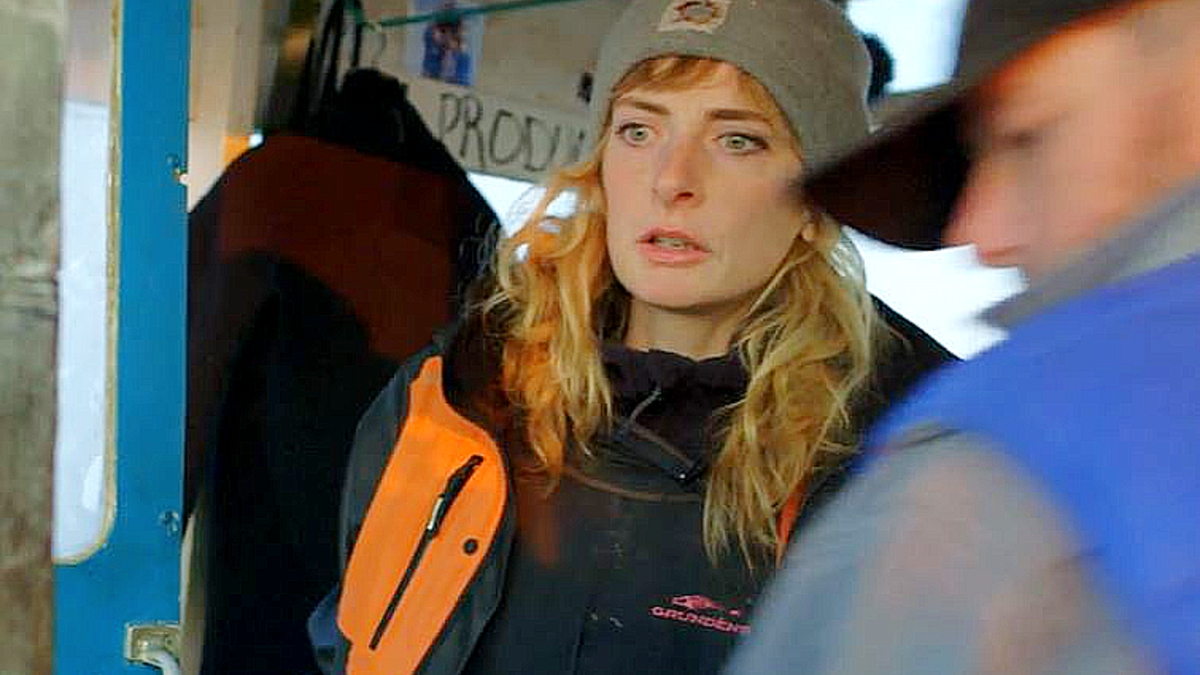 The finale for Bering Sea Gold on Discovery is tonight. This season has been filled with mechanical strife, claim jumping, and new monikers for all the cast as narrator Mike Rowe shares the exploits of a group of folks who stay close to the Nome, Alaska shore as they make the most of the short summer months.

The “Queen” is Emily Riedel, and TV Shows Ace caught up with her at the top of the season, and now we spoke to her again ahead of the finale.

The Kellys are trying to compete with “Mr. Gold,” aka “The King” Shawn Pomrenke, whose Tomcod claim and two dredges are outproducing them substantially.

Zeke and his motley crew are sailing to deeper waters. Will this unusual strategy pay off for him, or are the dumpster berries rife with a psychedelic mold that’s giving him a bit of a purple haze in his thought process? Time will tell.

And for Vern? His diver-down issues continue, but this “Ogre” will surprise people with the crafty knowledge of where to dredge.

As for Emily, her hard work and canny approach on where to pan for gold may or may not pay off as Ken Kerr’s claim number 6 showed promise last week when she sampled the shoreline. So will Em find more gold in this area?

TV Shows Ace spoke to Emily yesterday to get the end-of-season thoughts and found out her relationship with her dad is tighter than you might think. He walked her down the aisle in May!

The Momentum meter and this Celtic fairytale framing of each chapter with graphics, giving you guys all royal titles, Mike Rowe’s puns, and the choice of music. Did you appreciate the new humorous twist they gave the show this season?

Emily Riedel: Haha, I loved it, but as far as titles go, “Empress” would’ve been better [than Queen]. . I thought Vern’s designation as the “Ogre” was guaranteed to insult Shrek fans everywhere!

So Vern is the “Ogre,” you are “the Queen,” and your dad is given his own breakout interstitial segments that border on comedic, which show off his eccentric side. Talk about Steve this season. Are you happy he is on the show? How is your relationship with him now?

Emily Riedel: I am happy he’s on the show and is bopping around Nome! He’s always been an eccentric fellow, and I’m sure he’s modest about that in front of the cameras.

We have our ups and downs, but he walked me down the aisle in May, and that was a beautiful moment.

Zeke the “Wizard,” and the dumpster berries moment. What did you make of that and his motley crew and sailboat dredge approach? How much interaction do you two actually have in Nome while filming and not filming?

Emily Riedel: I sure wish Zeke would use his wizardly powers to mine some gold! Sailboats are for sailing… but! I’m sure if he cast spells on it for five to ten years, it could transform into a real dredge.

It was interesting to learn that there are visible signs of gold where the sand and clay meet cobble. Do you ever worry that you are giving away too many gold-finding secrets to people who come up there thinking they can jump right in this gold retrieval game?

Emily Riedel: There’s a saying that we rely on up here: “Gold is where you find it.”

Sure, the junction where sand and clay meet cobble is always interesting to check out, but there is absolutely no guarantee that you’ll find gold there.

Sometimes gold likes to hang in bizarre and inexplicable places, and all you can do is mine it and ask questions later. As for the competition… I’m not worried. Come have a go at it. It’s easy!

Claim jumpers, the Kellys think it’s pretty funny, and of course, we saw them get shot at. Are they really like they are in the show in real life? What is your relationship with Kris Kelly- you both have dads in the show.

Emily Riedel: It’s common knowledge that claim jumpers will be shot, so be one at your own risk… maybe they’ll hit a pontoon next time?

I don’t think the Kellys’ characters on the show have been exaggerated, but I can’t say I know them all that well.

You and everyone, it seemed, had lots of mechanical issues for all this season. How bad was it for the Eroica and the cost versus the gold retrieval? Was it a good season financially for you or too close to be comfortable?

Emily Riedel: It was pretty close! We had some very costly repairs, both in terms of equipment and the loss of production time. All you can do is have two of everything and hope for the best.

The operations are night and day between The Kellys and Shawn’s group, who are way ahead of the curve. Do you think the Kellys will always be in his shadow for production?

Emily Riedel: I think it’s more likely that Vern is an actual Ogre than for the Kellys to out-produce any excavator dredge.

Will Claim 6 – owned by Ken Kerr – be the next Tomcod for production, in your estimation?

Post-mortem chat: How do you rate your overall performance this season, and what do you hope for in the next filming, any changes, additions, subtractions, new cast?

Emily Riedel: I’ve got a lot of work to do on the Eroica! Not just in terms of repairs but in making her more of a gold-hunting machine than she already is.

I give my performance this season a 7.2 out of 10, and I’d love for you to tune in this year to see changes on the boat and the cast.

People are curious to know if you hang with anyone from the series off-season or when the filming ends. Is there anyone you are tight with you can discuss?