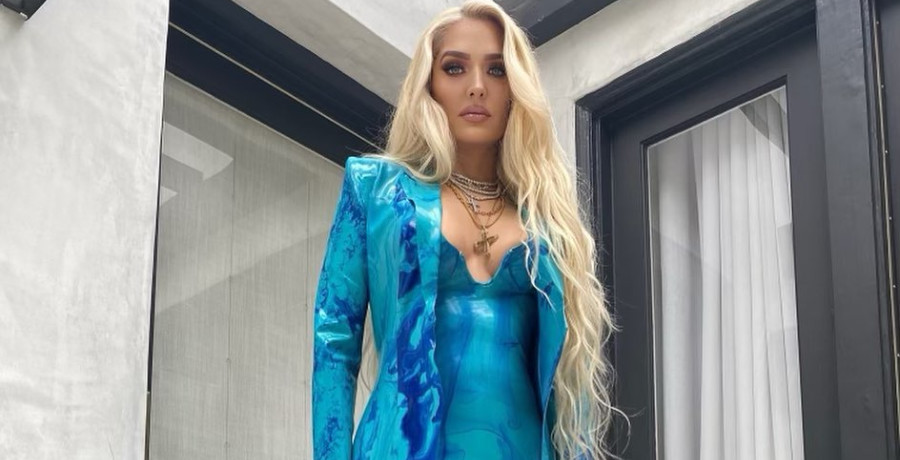 Erika Jayne blew a kiss to her haters and lovers. On Wednesday, June 30, Erika broke her silence on Instagram. The Real Housewives of Beverly Hills co-star remained quiet on the social media app for the most part. Erika especially kept quiet amid the premiere of The Housewife and the Hustler on Hulu.

Still, she used her Twitter to speak out about those makeup-free photos. She also used a reaction GIF that didn’t sit well with RHOBH fans. The reality star is deeply involved with her ongoing legal drama.

Despite her financial woes, Erika is still showing off her glamorous looks.

Erika Jayne blows a kiss before the RHOBH episode

On Wednesday, Erika Jayne shared a new photo on Instagram. This time, she wore a black blazer with a diamond necklace and stud earrings. Erika wore her signature blonde hair down with a middle part. She accentuated her look with a nude lip, groomed eyebrows, and faux lashes.

Erika simply captioned the post with the lips emoji. She got a lot of love from her famous friends. Designer Marc Jobs commented, “Stunning as always!! Absolutely flawless.” DOM&INK wrote a series of heart-eyed emojis. The Real Housewives of Atlanta star Kenya Moore chimed in, This blow-up doll face 😍😍😍😍” while The Real Housewives of Dallas star Leanne Locken added a series of fire emojis.

That’s where the love ended. RHOBH fans took over the comments section. One joked, “The queen of acting like she ain’t done nothing wrong… weakkkkk.” Another noted that while Erika is pretty, “this scandal and the victims that u took money from is not good.” Some fans wanted to know if Erika was wearing the jewelry with the embezzlement funds.

Bravo star made another appearance

Erika Jayne has been showing her face in recent days. Per Page Six, she stepped out in Los Angeles in a graphic sweatshirt and black leggings. She wore a GCDS shirt that included the message, “always cool.” The 49-year-old paired her look with white heart-shaped sunglasses, Nike sneakers, and a black tote bag.

The last time she went out in a casual look created a fuss on social media. Previously, Erika wore a T-shirt with leggings as she rocked a makeup-free look. The Pretty Mess author fought back at the critics on her Twitter account. She also slammed the “f***ing experts” who talk about her personal life as she continues to make headlines.

Turned over her financial records

Per another Page Six report, Erika Jayne was ordered to turn over her financial records as part of her estranged husband Tom Girardi’s bankruptcy case. That means fans will find out how much it really costs to be her. Erika Jayne’s divorce attorney, Larry A. Ginsburg, has to provide the records by Wednesday, July 21 at 5 p.m. PST. This still gives Erika time as she was given until 4 p.m. On July 16 to file an opposition to the order.

She was previously accused of refusing to turn over her bank records. Some critics think Erika is using her lavish lifestyle to cover up the assets throughout the bankruptcy case. She was also accused of creating a new company to funnel money after filing for divorce from Thomas Girardi in November 2020. The case is still ongoing.

The Real Housewives of Beverly Hills airs Wednesday at 8 p.m. ET on Bravo.