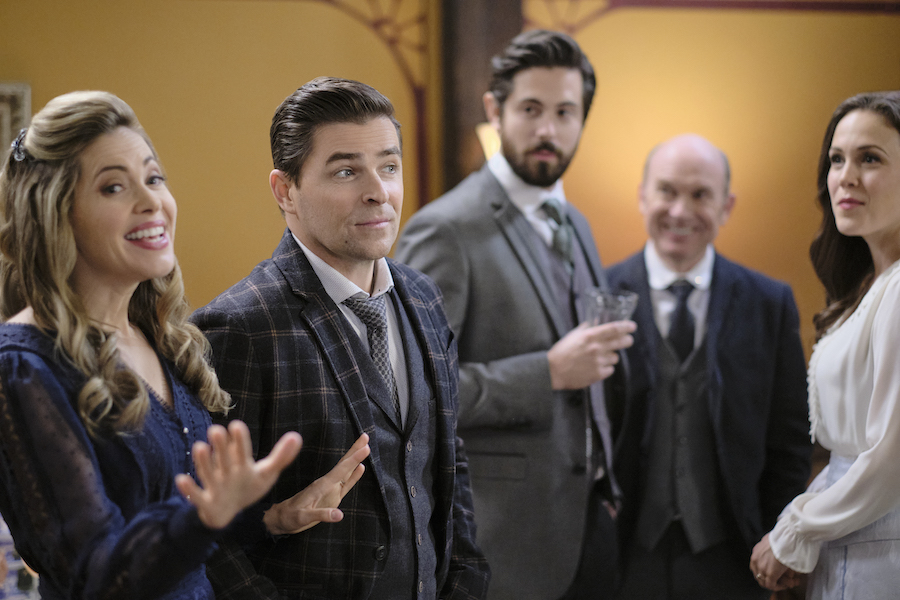 When talking about some of his favorite When Calls The Heart moments on the Sarah Scoop Show, Chris McNally starts with Kavan Smith. He explained that “Kavan is a total clown.” Chris went on to explain what an absolute prankster he is.
Moreover, Kavan is “fun to be around.” Chris explains that Kavan always makes everyone on the set laugh. For example, when they filmed a scene with Lee (Kavan) hitting his head. Setting up the scene, Chris explained that it was “frigid” that morning. You could see the other actor’s breath.
However, Kavan was under a blanket. Moreover, he had hot water bottles on his body and belly under that big blanket. Pascale and Eva both came in. Kavan could see Pascale’s breath, it was just that cold! However, Kavan was so toasty, he admitted, “Guys, I am so warm right now.”
In addition, Kavan put slices of cucumbers over his eyes. That meant that when Rosemary (Pascale) came running to see Lee, she first saw that. The best part is that they got her reaction on film! That provided a whole lotta laughs.

Last Season, Ben Rosenbaum discovered oil on When Calls The Heart. So, his character, Michael Hickam came running into the saloon. He was “covered” in a sticky mess. This was the “oil.” Unfortunately, this lasted for hours.
Chris McNally did ask if it was “bad” to admit that seeing Ben in a sticky mess was a highlight? McNally admits that part of the reason that this is entertaining is that Ben is such a “committed actor.” He gives it 100 percent. However, Chris admits that he is pretty shy. But, Ben has certainly been the source of some major merriment.

Everything about Elizabeth and Lucas is simply beautiful… And always and always Flavia gets it!
“And I need you to know that we’re fallin’ so fast, we’re fallin’ like the stars; fallin’ in love!” Thanks Angel for sharing this “work of heart!”❤️😇 pic.twitter.com/9Kn9X7KrHC

This When Calls The Heart Star Gets ‘The Giggles’ On Set

Lastly, When Calls The Heart has a huge giggler. That is Pascale Hutton. However, Chris McNally contends that when Pascale gets the giggles, she gets them bad. But qualifies that it does not happen very often. He cited a bachelor or bachelorette party scene that gave Pascale the giggles.
There was a type of game that was played on the women’s side. Pascale found something very funny and started laughing. But, because her laugh is “so infectious,” it was difficult for Pascale to keep a straight face. As a result, her co-stars got into fits of giggles too. Most of the cast had issues keeping a straight face for a “significant amount of time.”
This particular scene was trimmed up, but Chris admits that “time is money.” These fits of giggles do not help the budget! But, Chris admits it is tough to control giggles once Pascale starts. “You have to be a psychopath not to laugh when she’s laughing.”
Does any of McNally’s backstage shenanigans surprise you? Share your thoughts in the comments below.