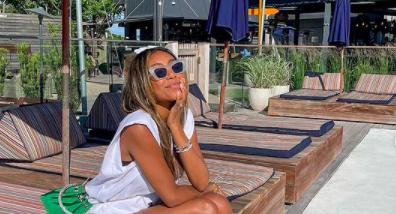 The pandemic was and is a tough time for everyone. Apparently, this includes the Bachelor Nation stars and their finances. A number of stars including Tayshia Adams from the show applied and got PPP loans during the pandemic.

So, what is PPP? PPP is a small business loan that companies could apply for during the pandemic so that they could continue running their business and paying their employees. Turns out, some of the Bachelor Nation stars including Tayshia Adams applied for the loan.

According to E! Tayhia’s company – Tayshia Adams Media – got a loan $20,833. So how did she manage that? Well, as an influencer she is technically an Independent Artist.

“As a business owner, television and podcast host, and brand ambassador, Tayshia obtained a PPP Loan that enabled her to hire an employee (someone who was previously unemployed), to whom she offers market-based pay and benefits,” a source reveals.

Now, Tayshia says she will keep her employee.

“Since exhausting the PPP Loan funds, but in light of the growing economy, Tayshia has committed to retaining her employee for the foreseeable future.”

Tayshia isn’t the only one

Sources reveal that Colton Underwood also had to ask for money but his was for his nonprofit business.

“Colton’s nonprofit filed for the PPP loan after their annual fundraising events were canceled due to COVID. None of the PPP went directly to Colton. In fact, Colton has never received any form of payment from the foundation, all of the proceeds go directly to people living cystic fibrosis,” a rep reveals.

While Colton has received backlash, he is quick to shut it down. He says he makes no money from his non-profit.

“My nonprofit filed for a PPP because we canceled our charity events for the year. We help people live with CF. I don’t make a dime from my nonprofit,” Colton writes.

Arie Luykendyk was also caught in this mess. He is getting scrutinized even harder because he and his wife bought a second home in Hawaii. $20k would certainly be helpful in a purchase like that.

Do you think the Bachelor Nation stars should’ve taken these huge loans? Let us know in the comments below. Come back to TV Shows Ace for more news on all of your favorite reality TV stars.