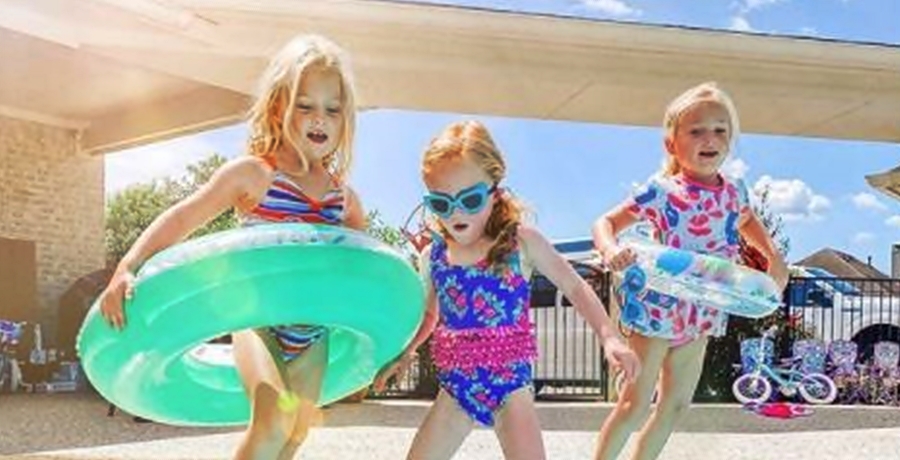 OutDaughtered star Adam Busby said that the kids can swim now as they visit their Nana in Louisiana. Of course, fans know the family has their own pool. So what’s wrong with it? Summer without a pool probably sounds very bleak for the quints who swim like fish. Perhaps they vacation elsewhere this summer until the pool’s all repaired.

Summer means vacations for the quints. Actually, someone commented on a post by Danielle this weekend, that they took more vacations than she did in her 59 years of life. Well, Adam explained in the past that they work hard for their money. Plus, some fans think that TLC helps with the costs for the ones they film for new seasons. This year, they already took a trip to Splashway Water Park. However, they spent time at home as well when the kids went to their summer camps.

OutDaughtered star Adam Busby posted about their latest trip away to Lake Charles. If you don’t know, he and Danielle came from Lake Charles and they have family there. So, a visit there seems perfectly reasonable this summer. When he shared about the kids swimming there, he said, “Our pool isn’t quite ready, but that’s ok! We made it to Lake Charles and Nana has a bubble machine by hers!” Actually, one photo revealed Riley swimming with an injury on her arm. However, it turned out to just be a bit of fun with a tattoo.

Fans ask about the pool at home

OutDaughtered fans know that TLC star Adam Busby has a really nice pool at home. So, one fan asked about it. They commented, “What have I missed…I thought you had a great pool? Well, Adam took the time and replied, saying that it needed resurfacing and more. He noted that when they moved in, the pool was in “bad shape.” As the plaster deteriorated, he worries about “leaks.” Actually, he mentioned they budgeted for it some years ago.

Apart from that, OutDaughtered star Adam Busby said they noticed the pebble patio burned the kids’ feet. So, they also lay a “cool deck.”

All Florida Pools recommends resurfacing your pool if “you see a great deal of damage on the pool’s bottom and walls.” Apart from leaks and other problems, eventually, the water can look dirty and unsightly, so it’s best to do it sooner rather than later.

What do you think of pool work done now to prevent leakage in the future? Do you agree it’s a bit unfortunate the work is done in summer? Sound off in the comments below.

Remember to check back with us often for more news from OutDaughtered star Adam Busby on TLC.