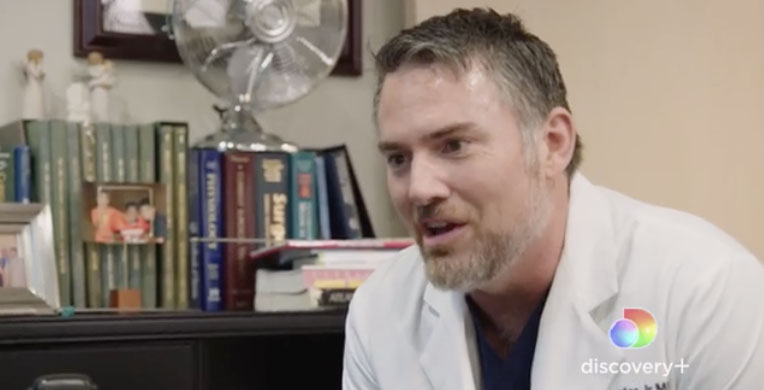 Too Large Corey meets his doctor for the first time

TLC fans are already familiar with Dr. Procter. Assumably, much of his following on Too Large comes from the fact that he is on 1000-Lb Sisters as Ammy and Tammy Slaton’s doctor. Additionally, according to his Instagram (@docbytheton), he’s also known for his role on a third TLC show, Family By The Ton.

Recently, TLC posts a teaser video for an episode of Too Large. The trailer is to highlight Corey as he meets Dr. Procter for the first time. However, the point may be lost since Corey (and fans) think Dr. Procter is a daddy.

While Corey prepares to meet Dr. Procter, he lets viewers know that he doesn’t know how much he weighs. He calls the scale his “arch-nemesis.” To lighten the mood, the trailer shows Corey having a conversation with Karen, the scale. It’s probably at this point a fan comments the following. “He needs his own series he is such a mood!”

Next, Corey’s facial expression is priceless when he sees Dr. Procter face-to-face for the first time. In the confessional segment of the episode, Corey proclaims the following. “Oh my God. Dr. Procter is a DADDY! We’re all thinking it. He’s beautiful.”

After that, Corey lets Dr. Procter know about Karen. Heartwarmingly, Dr. Procter seems entertained by Corey’s banter. However, the moment of truth is quickly approaching as Dr. Procter has Corey step on the scale. Shockingly, Corey weighs in at 664.4 pounds. This seems to get Corey where it hurts. He explains that he doesn’t feel like a “bad bitch” when he sees that number.

In the comment section of the trailer, fans agree that Dr. Procter is a daddy. See some of their comments below.

What do you think about Corey’s (and fan) comments about Dr. Procter being a daddy? Let us know your thoughts in the comment section below. Make sure to come back to TV Shows Ace for more Too Large news.