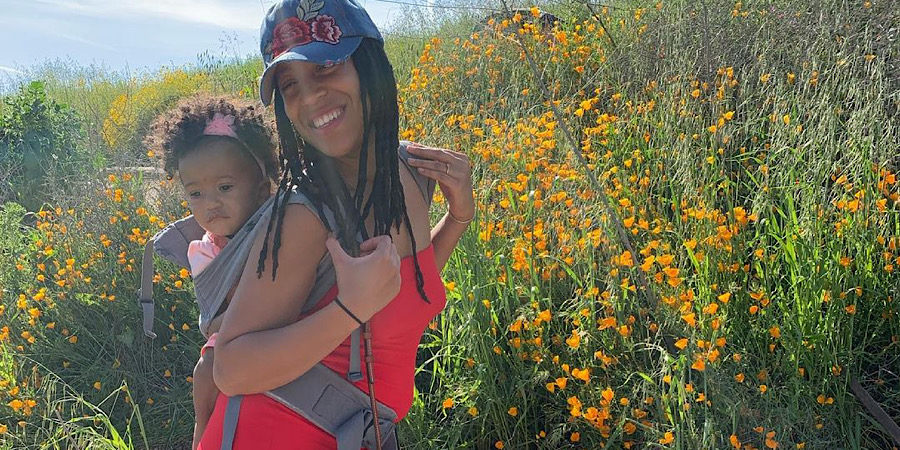 Ashley Snowden has been making waves lately. The Seeking Sister Wife star recently let her followers know she will continue to remain unapologetically herself. This comes on the heels of people speaking out against her husband, Dimitri. Additionally, rumors have been flying that Dimitri is now homeless after emails started circulating about debts he owed. It appeared Ashley may have had enough and left him. Now, she celebrated Father’s Day with an unexpected gentleman. Seemingly, Dimitri was nowhere in sight.

Ashley and Dimitri seemed to have a balanced relationship. She was very supportive of helping him find a sister wife. When Vanessa Cobbs came into their lives in Season 2, Ashley liked her as much as Dimitri did. She helped her through the mandatory 21-day alkaline diet. They even had their nether regions steamed together. No one expected Cobbs to up and leave after the lavish wedding ceremony they had on the season finale.

By Season 3, the Snowdens were courting two women, Tayler Monique and Christeline Petersen. Ashley was excited for both ladies to possibly join the family. It was not until quarantine where Tayler and Ashley began to truly butt heads. Things fell apart with Tayler but Chrissy stayed with her two kids. They became a little family and Dimitri soon proposed. The two legally married so she could stay in America. However, the nightmare was about to begin.

Chrissy accused the Snowdens of domestic abuse. She obtained a restraining order against Dimitri, which was later dropped. But the damage was done. Cobbs and ex-sister wife, Ariadne Joseph rallied around Chrissy. Former friends continued to speak out against Dimitri. Soon, blogger John Yates released the emails which showed Dimitri may be homeless and desperate. Ashley remained confident despite the scrutiny. Yet, she looked like she was cracking.

Ashley has never been big on posting much with Dimitri on social media. On Father’s Day, that trend continued. She shared a post of her father, who no one has really seen, even on Seeking Sister Wife. It appears they have not been together for a while. She posted a throwback photo of her father and her (late?) brother. The sentiment was about her heart being full now that they were together.

Apparently, it had been some time since this had occurred. She also sent a shout-out to all the dads who are both alive and have passed. No mention of Dimitri, the father of her three children, at all. Are you shocked she did not feature her husband? Do you think she had left them or they are still together? Let us know in the comments below.