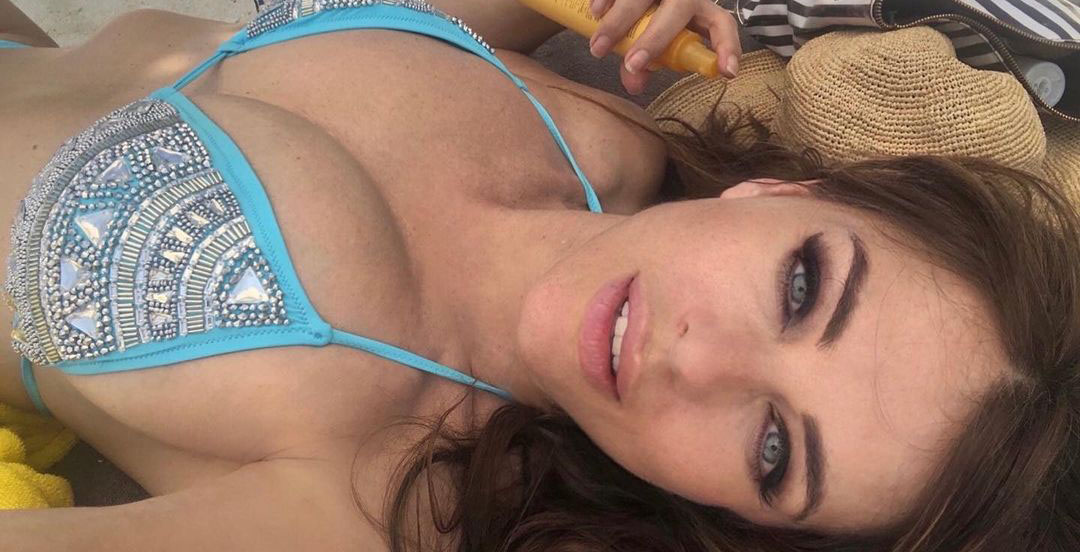 Elizabeth Hurley stuns Instagram with a nearly NSFW topless photo. The 56-year-old English actress, businesswoman, and model surely has jaws dropping with her latest social media display. Keep reading to find out more about why Elizabeth Hurley is topless on her Instagram.

The Runaways star shocks her followers on Instagram with a topless photo. While her followers may be used to seeing her in a bikini, from the reactions on the post, it doesn’t seem like they’re used to seeing Elizabeth Hurley topless. According to an article from Women’s Health Magazine, Hurley’s recent bikini photos on Instagram are from the comfort of her own backyard. The caption for her latest jaw-dropping photo says it all. “Having my own staycation… in my own home 🤷🏻‍♀️😘” As for why? It seems like just because she can, but there may be more to it than that.

It goes without saying, that Hurley’s fans are here for the topless display. Not to mention, the washboard abs. Many of her fans try to shoot their shot with the actress. However, it appears that she doesn’t pay them any attention. One of the comments that can’t be argued with says, “Like a fine wine, only gets better with age🔥😍❤️.”

This shouldn’t come as a surprise

Anyone that follows The Royals star’s Instagram shouldn’t be surprised to see a scantily clad Elizabeth Hurley. Notably, she regularly posts photos in bikinis on her Instagram. Just last week, Elizabeth is dancing with her friend to Spice Girls. She captions this short clip with, “Who doesn’t dance to Spice Girls on a sunny birthday weekend in Blighty?”

Consequently, there’s a more logical reason for the abundance of photos of the Gossip Girl alum in bikinis. The reason being she sells them. One fan points out the following in the comment section of one of Hurley’s recent posts. This comes after another follower inquires about why Hurley is always in bikinis, and another fan chimes in, “cause for one she actually sells bikinis & leisurewear she is wearing. Its called free promotion. Its business & fun.”

What do you think about Elizabeth Hurley and her topless display on Instagram? Did you know she has her own bikini and athleisure line? Let us know your thoughts in the comment section below. Make sure to come back to TV Shows Ace for more television news.