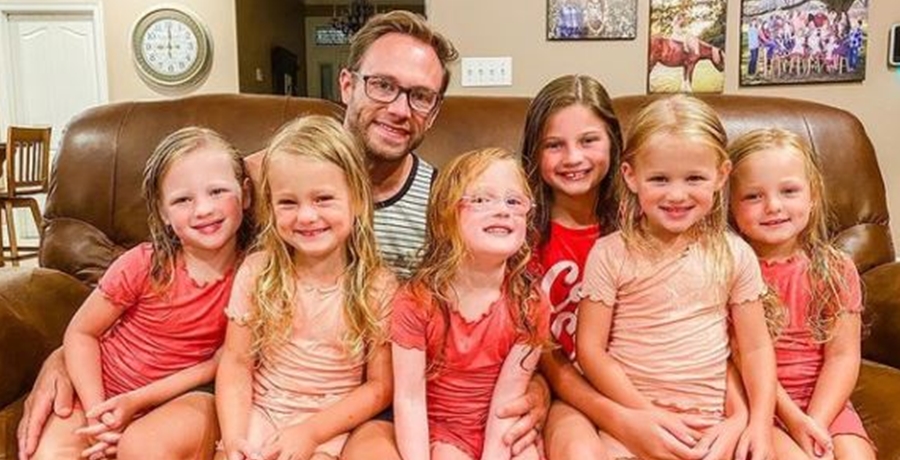 OutDaughtered fans know that the quints usually travel around in the family van. With lots of space, it’s ideal for their six kids and for a few cousins as well. However, Adam got his dream car on his birthday, and there’s not enough room for everyone. Well, it looks like he treated the girls to a ride in batches. Meanwhile, Uncle Dale Mills said that he also wants a ride in it. But, he might not be too keen on the sort of bad hair experience that the quints went through.

When Adam Busby got his new Jeep Gladiator Mojave he seemed absolutely thrilled with it. He previously had a truck but not as handsome as his new car. A lot of TLC fans really liked it. However, others gave him a hard time about it. After all, it’s not really geared up as a family car. Defending himself, the TLC star reminded them that they already own the family van. So, when they go anywhere with the kids, they usually take that one. Additionally, he pointed out, “It has just as many seats as my last truck.”

Since then, the OutDaughtered quints managed to enjoy a ride in the Jeep. The only problem is that Adam took the top off. Actually, he also told fans that he still waits for some stuff and it sounds like he’ll splash out on some customizing. Some fans wished that could take a ride in it with the top down in the warm summer weather. In a new post, Uncle Dale also expressed the same sentiments. It came when Adam shared a photo of the kids in the Jeep. He showed Ava, Riley, and Parker. Probably he took Blayke, Hazel, and Olivia on a separate drive.

Bad hair day for the kids

All of the OutDaughtered quints wear their hair quite long, so as you can imagine, a ride in a Jeep with the top down really must be windblown. In his caption, Adam wrote, “Definitely learned that i need to keep a brush and some pony tail holders in the glove box after their first trip with the top off.” Then he used the hashtag #jeephairdontcare.

Fans commented on the photo that showed the OutDaughtered quints with tangled hair, especially Parker. One of them said, “Y’all learned quick about Jeep hair 😂😂. They will have so much fun [in] it!!” Then one person suggested, “Lots of conditioner for those tangles!”

What do you think about the quints who experienced a bad hair day? Do think it’s gonna take a lot of careful brushing and washing to untangle it? Sound off in the comments below.

Remember to check back with us often for more news and, updates about the OutDaughtered quints and their dad, Adam Busby.