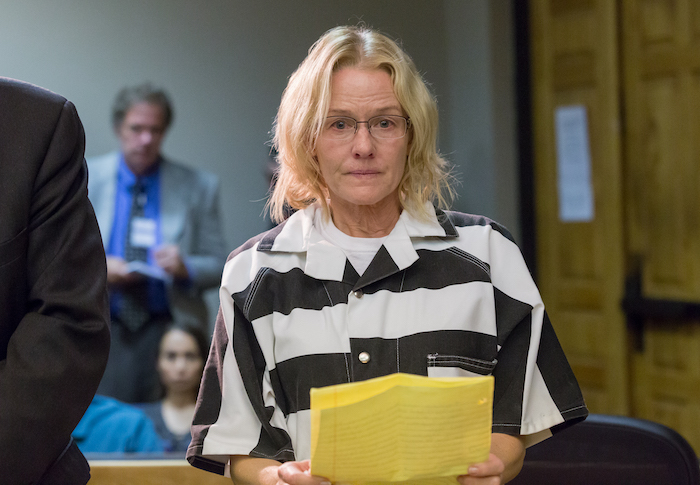 Lifetime has another Ripped From The Headlines movie, alongside an accompanying Cellmate Secrets. This week, the network is airing The Seduction of Joyce Mitchell. This movie stars Penelope Ann Miller (American Crime), Myk Watford (Law &Order: Special Victims), and Joe Anderson (Across The Universe).

Be sure to watch the documentary right after, Cellmates Secrets: Joyce Mitchell. Angie Harmon (Rizzoli and Isles) narrates this documentary.

What do we know about each movie and when can you watch them?

Ripped From The Headlines: The Seduction of Joyce Mitchell

Richard and David immediately set their sights on Joyce as the perfect pawn for their escape plan. Flattery really works. The two inmates easily manipulate Joyce. Moreover, she soon agrees to help them break out.

In addition, she loses reality. Joyce is mentally seduced by the two men. Soon, she is wrapped up in a fantasy that the men were in love with her. However, Joyce goes along with them when they suggest killing her husband. They suggest this with the explanation that they can all run away together to Mexico.

At the last second, Joyce decides she can’t go through with the plot and doesn’t show up at their pick-up point. Soon after, a massive statewide manhunt for Richard and David ensues culminating in a deadly takedown and her conviction.

Fill your Friday night with #truecrime. An enhanced airing of New York Prison Break: #TheSeductionofJoyceMitchell starts at 8/7c followed by the premiere of #CellmateSecrets: Joyce Mitchell at 10/9c narrated by @Angie_Harmon ! pic.twitter.com/LgEhEgoZVw

Immediately after The Seduction Of Joyce Mitchell, is a continuation of her story. Angie Harmon narrates Cellmate Secrets: Joyce Mitchell. According to the Lifetime press release, Mitchell is the former prison staffer who helped two convicts escape.

Moreover, this leads to a fatal manhunt in upstate New York. Former Inmate Erik Jensen, who worked with Joyce in the Clinton Correctional Facility’s tailor shop, reveals how Joyce’s incredible need for attention left her open to being manipulated by Richard and David.  In a sit-down interview,  Erik describes tactics that inmates used to manipulate guards.

In addition, he details the techniques that the two convicts used to convince Joyce to help them escape.  Pam White, Joyce’s supervisor, recounts how she saw red flags long before anyone else. Eventually, Joyce left her position.

Kris Mullady is a Corrections Sergeant who oversaw security operations outside the building during the time of the escape, recounts the events that led up to the escape and the behaviors of those involved, including those of Joyce.

When Can You Watch The Seduction Of Joyce Mitchell?

YUCK!! What Has Savannah Chrisley Done To Her Face?!
Not Lindsie Chrisley’s Real Father? Todd Kills With Kindness In Response
Danielle Busby Cranks Up The Heat, Flashes Hint Of Cleavage: See Photo
Is This A Sign ‘Bringing Up Bates’ Will Be Canceled?
Josh Duggar Prohibited By Court From Seeing His Sister Jessa’s New Baby