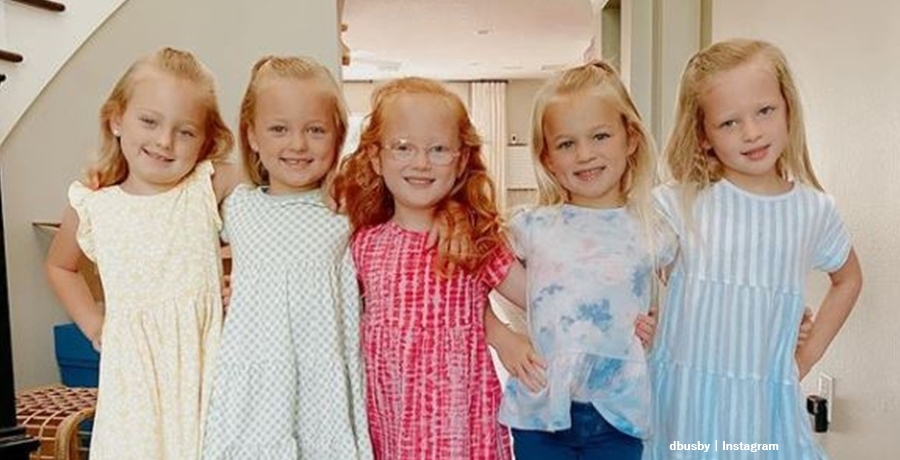 Hazel Busby from OutDaughtered on TLC accumulated many fans. She’s cute, she’s pretty, suffers from an eye problem, and is easily identified by her red hair. So, fans keep an eye out for her on social media. Fans know that she opted out of cheer camp and instead, stayed with her dad. The other quints were tricked into thinking she would just weed the garden. However her dad Adam made it special for her and presented her with “Daddy Camp.” Did she also opt-out of the invention camp?

Adam explained why the red-headed quint preferred not attending cheer camp. Everyone knows it takes balance and good coordination to participate. However, we reported that the OutDaughtered dad noted that, “her balance and coordination issues can make some things a little more challenging for Hazel.” Instead, he took her to the Texas Entertainment Xperience for the day. They also enjoyed breakfast together.

The next day, Hazel Busby and her dad went and explored a new resort community not far from League city. Called the Lago Mar Lagoon, there she enjoyed playing in the sand. Plus, Adam told OutDaughtered fans that he plans on taking the whole family there soon. Well, after cheer camp, the quints went off to invention camp while big sister Blayke went to church camp. But did she wriggle out of that as well? TLC fans understand her coordination problems as she was the last quint to lean to walk. However, usually, she’s very curious.

Red-headed quint not in the bus?

Before invention camp started, Hazel Busby featured in a photo that her mom posted up of all, the quints. The TLC star explained that the invention camp is “a STEM based camp that helps turn curiosity into inventions!” Well, fans of OutDaughtered know that Hazel’s interested in bugs and things. So why wasn’t she moving around inside the bus when Danielle took the kids for their second day at camp? In her Instagram Stories, Danielle shared a clip about them all going to camp. In the background, the twins, Riley, and Parker were visible. So too, was Beau the dog on the front seat.

No flash of red hair showed as the kids moved around in the bus from seat to seat. Perhaps Hazel Busby sat in the front with Beaux as later, Danielle shared a photo of them curled up together. Alternatively, perhaps she liked the idea of going with her dad to fetch Blayke two hours away from her church camp. After all, she also shared a photo of Blayke cuddling Beau. For now, until Danielle or Adam clarifies, fans simply can’t tell if Hazel skipped invention camp or not. Still, we think that possibly she went along to invention camp as her mom shared that single photo of her with the dog.

What are your thoughts about Hazel possibly not moving around inside the bus with the other quints? Was she just strapped in and sitting quietly at the back? Or did she prefer her dad’s company again? Sound off in the comments below

Remember to check back for more news about Hazel Busby from TLC’s OutDaughtered.