Mobster Cyrus Renault has terrorized Port Charles for more than a year, but new General Hospital spoilers reveal that the reign of terror may be over. Actor Jeff Kober reportedly departed the show, although that may be a temporary development.

During the General Hospital episode that aired on Wednesday, June 16, Cyrus learned he was off to a maximum-security prison, noted SheKnows Soaps. General Hospital discharged him and he exchanged terse words with his half-sister Laura before being whisked away in a wheelchair.

Laura insisted they would never truly be family, but he took one more opportunity to taunt her. He insisted they shared many qualities in common and suggested they would cross paths again. With that, Cyrus departed, and General Hospital spoilers suggest that’s the last viewers will see of him at this juncture.

Throughout Cyrus’ time in Port Charles, he wreaked havoc all over town. He wanted Jason dead, he nearly caused Sasha’s death, and he engineered the explosion at the Floating Rib. That incident alone caused Dev and Dustin’s deaths along with Lulu’s coma.

It turned out Cyrus was Martin’s brother and Laura’s half-brother, but that didn’t redeem him. He also took over General Hospital and had big plans for a drug as he also tried to grab more mob territory. Ultimately, however, a gun battle at the waterfront led to his demise. 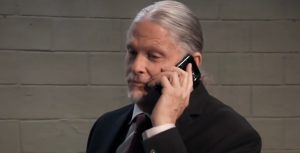 “I hope we see more of Cyrus. Let him be a drop in villain. It would work well for him IMO,” one viewer tweeted.

“I’d be fine if #gh [brought] Jeff Kober back as Cyrus in the future (distant) as long as they write him like they did near the end of the run. He could be a fun short run villain to bring back occasionally to wreak havoc then leave,” another suggested.

Leaving With A Bang

Cyrus not only did his best to press Laura’s buttons on his way out, he needled Finn as well. In this case, however, what he said was invaluable. Finn has been torturing himself trying to figure out why his cure didn’t work for Chase. General Hospital viewers had it figured out, knowing Cyrus had interfered with the DNA test that “proved” Finn was Chase’s father.

On his way out, Cyrus saw Finn and mentioned how well it worked out that Finn and Chase learned the truth before Chase died. Luckily, Finn didn’t brush off that comment and it finally seemed to nudge him toward figuring out the DNA test was wrong. General Hospital spoilers hint this last comment by Cyrus will be key and viewers will be curious to see when and if the mobster returns to cause more chaos.