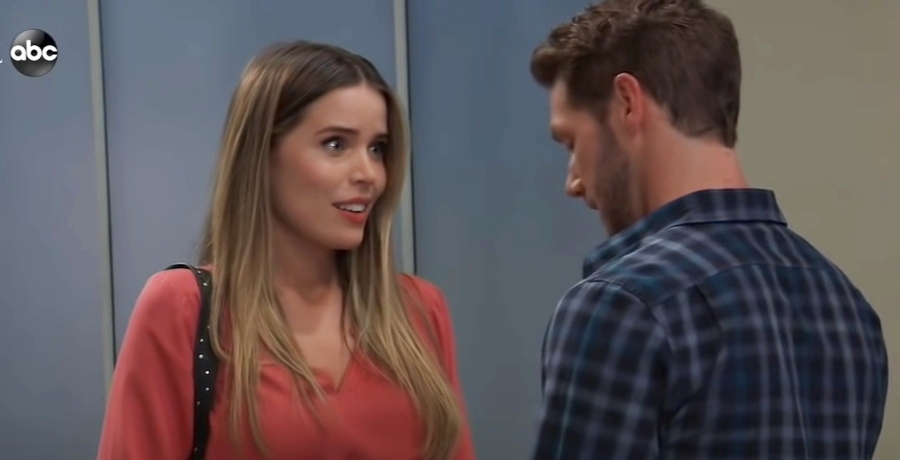 General Hospital star Sofia Mattsson revealed some fabulous news over the weekend. After one spark-filled fling in the garage between Sasha and Brando a while back, Sasha ended up pregnant. This development came as a bit of surprise out of left field, considering there was already plenty of baby action on-screen with Maxie’s baby due and Brook Lynn’s fake baby scam. It turns out, however, that the writers had a good reason for springing this pregnancy on everybody.

In mid-May, Mattsson shared a wedding photo on her Instagram page and noted it was her anniversary weekend with her husband. Could it be that Mattsson was pregnant in real life, thus the Sasha pregnancy? Fans have been going nuts in social media groups because her baby bump was so big on the show. But alas good old soras (Soap Opera Rapid Age Syndrome) works for children and pregnancy these days on General Hospital.

Mattsson and her husband just celebrated what was seemingly their first anniversary. None of the other photos on her Instagram page hinted at a baby bump of any size. Granted, she doesn’t post all that often and few of the shots are candids. All fans could do for a bit was speculate.

On Sunday, Mattsson confirmed that she’s indeed pregnant. In fact, it turns out she’s been hiding this exciting development for quite some time. The General Hospital star uploaded two gorgeous photos to her Instagram page and admitted she was “almost ready to pop.”

“BIG things happening!! So happy and excited to finally share this,” Mattsson wrote in her caption. “Kept it a secret for a while to not spoil anything for GH viewers, but now that miss Sasha Gilmore’s pregnancy is in full force I can finally share that I’m so grateful to be sharing this pregnancy journey with her!” she continued.

Of course, these General Hospital cast members have known about Mattsson’s pregnancy for months now since they work with her on the set. However, now that the General Hospital star could share the news with the public, her co-stars were more than happy to help celebrate.

Sasha’s early in her pregnancy on the show, even if Mattsson seems almost ready to deliver in real life. What kind of drama can viewers expect with Sasha and Brando’s journey to becoming parents? In theory, they’ve already navigated the Cyrus issue, but it’s unusual for a pregnancy to progress in Port Charles without some sort of threat.

At this point, General Hospital spoilers from SheKnows Soaps reveal nothing juicy about what’s next for “Brasha.” News of Mattsson’s real-life pregnancy thrilled fans and they are anxiously waiting for additional news.