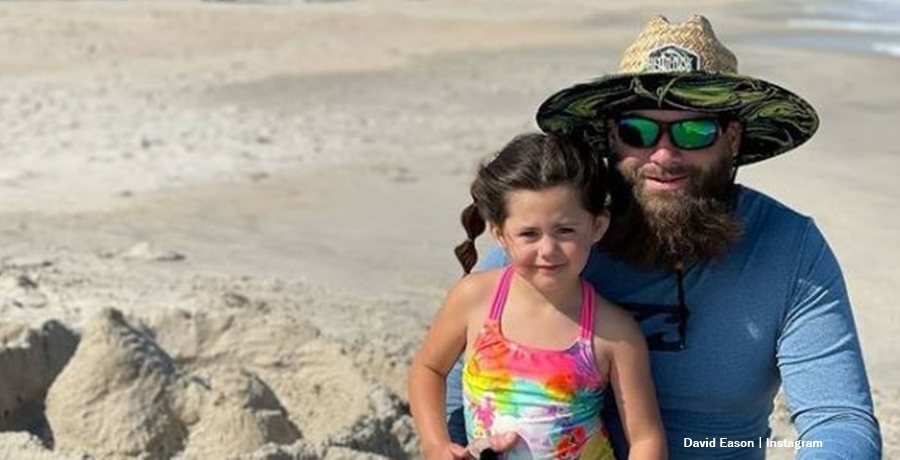 David Eason from Teen Mom killed their dog, Nugget. MTV fans know that he claimed that the pup nipped at Ensley’s cheek. Well, a huge court case and loads of publicity followed as CPS took the kids away and they ended up with other family members. Fans felt shattered because allegedly, he beat the dog and shot it and at least some of the kids witnessed it. Seemingly unfazed by it all, he later shared another video where he encouraged Ensley to get in the face of a dog. This week, he shared another photo of a dog with his daughter. So, some critics wonder if he deliberately goes fishing for trolls. After all, he must know he’d get bad reactions.

David Eason waited until Nugget nipped before stepping in

A lot of criticism went the way of David, as he allowed Ensley to get in the face of Nugget. Not disciplining her despite the dog’s unease, he waited. David filmed the video from across the room and didn’t step in to help until the dog nipped at his daughter. Later the Teen Mom alum shared the video in his defense to show that the dog truly nipped at his daughter. Allegedly, a source revealed that after the dog snapped at Ensley, David slammed the dog against the deck in the backyard. Then, he took him out to the woods and shot and killed him.

MTV fans felt completely blown away after the court cases and the custody battle to get back the kids. In 2020, David Eason revealed another clip. This time, he encouraged his daughter to once again get in a dog’s face. We reported that he showed Ensley climbing all over the dog that he called, “Junior.” Then, he said in the caption, “Dogs are meant to be loved on, kissed in the face and tolerant of children’s behavior.” Fans seemed very unhappy, especially as the dog looked uneasy when Ensley cuddled it close next to her face and pulled on his ear. Eventually, flooded with critics, he closed off the comments.

While Jenelle claimed that she wouldn’t mind returning to MTV, fans won’t ever forget what David Eason did with Nugget. Heavy.com reported that she told Candace Owens in May, “I’m open to opportunities…Probably not the same show, but I’m open to talking to any networks.” So, clearly, she still hopes that someone takes her on again. Well, with David constantly reminding fans about the Nugget incident, possibly, networks would rather stay away.

On June 10, David Eason shared a photo that showed Ensley with another dog. As usual, she was close to its face. In his caption, he wrote, “If you can’t get in your dogs face and give him kisses you need a new dog.” Some followers agreed with him, but others felt that kids should be taught how to behave around the animals. Critics slammed him all over again. One Teen Mom fan noted, “Umm actually, no. Kids need to be taught how to act around animals. It’s not up to the animal to put up with obnoxious behavior from children.”

Another critic wrote, “This is a disgusting attempt at justifying what you did.” However, some people wonder if he posts them deliberately to work up critics. One of them noted, “You must have known that people would react badly to this post.”

What are your thoughts about David still encouraging his daughter Ensley to get in the face of dogs? Do you think that sometimes he deliberately fishes for trolls by posting this sort of thing? Sound off in the comments below.

Remember to check back with us often for more news about Teen Mom alums David Eason, Jenelle and the kids.