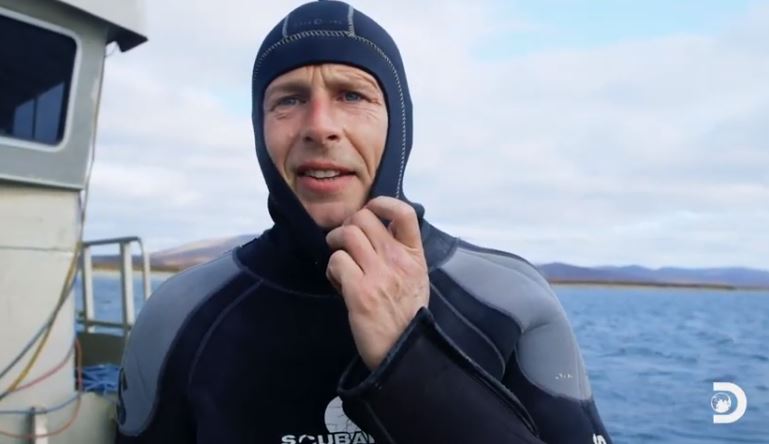 On this Friday’s Bering Sea Gold, Kris Kelly is finally on a hot streak, but will it last?

The Kelly clan are featured in TV Shows Ace exclusive clip below as they are up for a good old-fashioned gold hunt and contest with the McCully clan.

The Bering Sea Gold action is aboard Dave McCully’s boat, and the two tribes are suiting up to get into the water, and they are ready to face off to see who can find the biggest gold nugget.

The twist is the Kellys are ride-along, and Dave McCully gets a taste as he’s the leaseholder in Cripple River.  Kris may even have to give up his gold nugget found the day before as payment to Dave.

Also, in the episode, Zeke hopes to find his perfect claim match.

And “Mr. Gold” Shawn Pomrenke needs the Myrtle to save the Christine Rose.  Meanwhile, Eroica captain Emily Riedel is down to her last shot.  And Vernon’s luck with divers gets even worse, if you can imagine that.

In the clip, Kris is good-naturedly lecturing his father Brad, brother Andy, and the McCully crew to challenge and pose a contest and competition. But, of course, it is met with a bit of sarcastic humor.

He says: “What I think we should do is we should have a competition.

Kris Kelly says: “So we finally got an opportunity this summer. Dave McCully is letting us mine one of his leases. And we’re going to be mining Cripple river like Dave’s crew.  But I don’t want to be an employee. I want to be a partner, especially with the millionaire.”

He adds: “We’re going to lay down the rules right now make sure it’s rules are fair [and]super simple just to make
sure everything’s fair. We’re both starting with clean boxes today. We’re gonna go each of us put five hours
underneath the water. The first gold of the season…”

Kris says: “So right now Dave’s offering the nugget I got as a prize for today’s competition, so I have a chance of getting my nugget back. I can do this.”

Laughing about the nature of this ad hoc contest, Dave McCully says: “I put my money on Chris McCully. I think he’s got him beat. It’s actually it’s a no-brainer.”

Wearing his favorite lucky hoodie, Brad Kelly says: “I have to put my money on my kid.”

Mr. confidence, Kris Kelly adds: “This is money in the bank today. So I’m gonna go down there and kill it.”

Looking a bit resigned, Brad says: “And if not, I got Andy as a backup.”

Last we heard from the Kelly clan

Brad brought his sons to Nome to get rich quickly, but five years in the three Kellys haven’t even come close. Loyal to a fault, sons Kris and Andy haven’t abandoned Brad yet.

A few clicks back this season, the Kelly Crew were being shot at in Elim. The family was facing gunfire from some angry locals who gathered at the shore and took aim.

They have appeared on the series since Season 2 premiered in 2012. His sons are Kris and Andy Kelly, who are also divers alongside their dad.

Tune in to see if Kris Kelly wins the Cripple river competition: