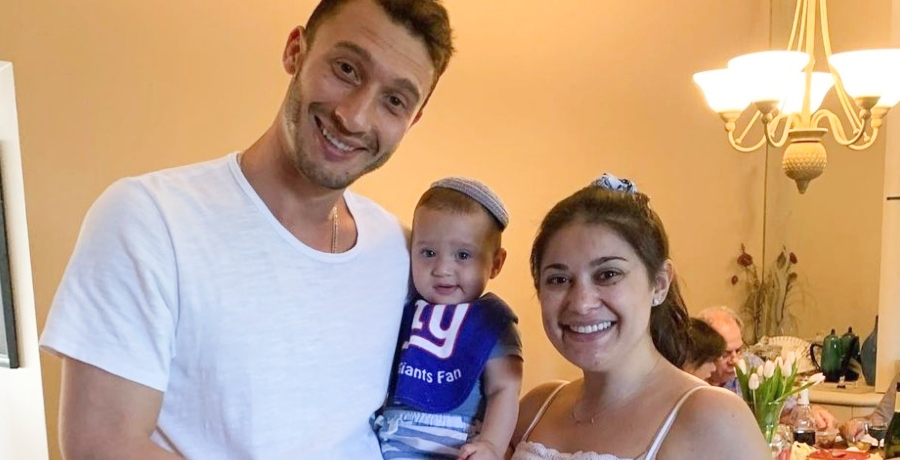 90 Day Fiance fans heard that Alexei Brovarnik might be in Israel right now. That sparked some speculation that there’s some sort of a breakup or problem between him and his very pregnant wife Loren. Of course, it seems like a sensational story to write and slant it as an abandonment of his wife ahead of her due date. However, the TLC stars never explained anything, so perhaps it’s a stretch.

TLC fans know that Loren met her husband when she visited Israel for her birthright trip. There, she met her husband-to-be as he worked as a medic with her group. Fans know that the couple seems very proud of his country and that’s completely understandable. Most people born and raised in any country support their nation. Actually, his family still lives there, and his old friends and schoolmates, and work colleagues.

However, some fans hate that they take a pro-Isreal stance during the Israel-Palestine conflict. Nevertheless, for Alexei Brovarnik, it’s unlikely he’ll suddenly start being pro-Palestine in the conflict. After all, he cares about his family and his homeland. So, probably, he ignores 90 Day Fiance critics.

Meanwhile, Loren expects their second child. Shai, their firstborn is an adorable child and fans love him. Actually, most of them really love Loren and her husband. They bring a relatively drama-free scene to the TLC franchise. Some fans thought she birthed her second baby back in May. However, that proved incorrect. Apparently, she expects her second child in early August. So, assumptions that Alexei Brovarnik might have left her to go on a jolly holiday to Israel seems unfounded.

Selfie of Loren’s husband in Israel

TV Season Spoilers speculated that perhaps there’s a breakup between the two 90 Day Fiance stars. They also noted, “some fans say that there are likely some issues under the surface that the TLC stars are hiding. These rumors started from Alexei’s new pictures uploaded on his social media.” Well, the photo they referred to involved a selfie that Alexei shared two days ago. In his selfie, he revealed he was in Israel. His caption only read. “#mondaymood😎.” Some fans assumed he went home for a bit. One of them said, “Someone’s home 🙌🙌🙌.”

Well, that sparked a conversation about whether he was in Israel more not. However, some Israelis wrote that it is indeed, Israel. Meanwhile, some 90 Day Fiance fans wondered if Alexei Brovarnik left his wife alone and rushed over there because of a problem in the family. Of course, that’s possible, given the number of rockets fired into the country right now. Of course, it also sparked a row between pro-Palestinian fans and pro-Israeli fans. However. nowhere in the comments do fans talk about them “hiding” something or going through a breakup. But there’s no way of knowing if some comments were deleted.

There are some other possibilities apart from a family member injured or a breakup and trouble in Paradise. Firstly,  one fan 90 Day Fiance thought it might be an old photo. Perhaps Alexei just thinks of his homeland as his family faces a lot of danger. Well, so do thousands of people in the whole region, but right now, he probably thinks of his own family. Of course, another slim possibility might exist. As an Israeli citizen, he might still be on call for armed conflict. Conscription in the county is mandatory for Israeli citizens, with only some deferments allowed. So, Alexi probably did his conscript service. For all fans know, he might, under emergency, be called up for a few weeks to help defend the country.

Nobody really knows if Alexei Brovarnik is actually away in Israel or not. However knowing him as a nice person who cares about his family, hopefully, he and Loren clarify the situation. After all, right now, it’s not easy to travel to Israel. According to the Jewish News Syndicate, Israelis returning from abroad must self-quarantine for 14 days. Recently, they extended that date through to August 1.

Remember to check back with us often for more news about Alexei Brovarnik, and Loren from TLC’s 90 Day Fiance. If we find out more about Israel, we’ll be sure to let you know.

Does ‘Seinfeld’ Have A Netflix Release Date Yet? When To Expect It
Is Lifetime’s ‘Secrets Of A Marine’s Wife’ Based On A True Story?
Lauryn ‘Pumpkin’ Shannon’s Baby Boy’s Name: When Will Fans Meet Him?
‘Below Deck’ Daisy Has Drunk Regrets After ‘Sailing Yacht’ Reunion
‘Below Deck Sailing Yacht’: Dani Sets The Paternity Rumors Straight