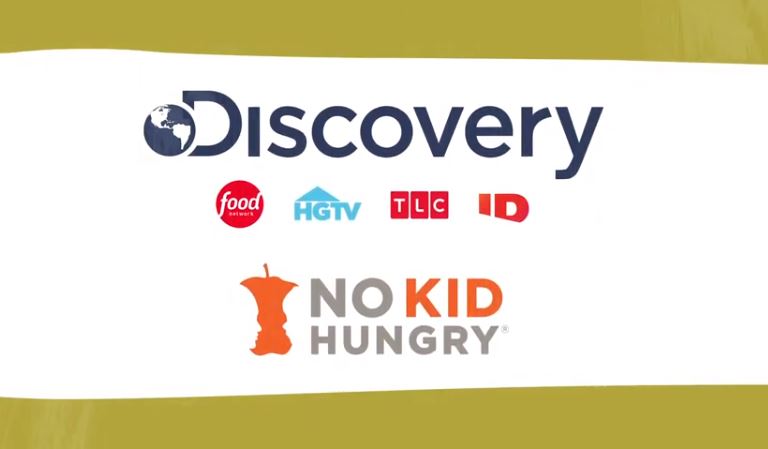 Today, Discovery announced the success of the No Kid Hungry program and challenges viewers to keep the good deeds flowing this year, as COVID is on the wane, but American children are still in need.

Now more than ever as food prices for average families are through the roof.

Discovery today revealed that it’s TURN UP! FIGHT HUNGER program with partner No Kid Hungry, launched back in 2019, has served a billion meals to hungry kids in the U.S. ahead of the goal year 2025.

A billion meals! To American kids in need. All done with the help of viewers like you.

Feeding Hungry Kids in America Through 2025 and Beyond

This month, Discovery Inc’s, TURN UP! FIGHT HUNGER program, a proud partnership with No Kid Hungry, reached its goal of helping provide one billion meals to kids living with hunger in the U.S.

Since 2019, the campaign’s five-year goal was to provide one billion meals, but due to the extensive need during the COVID-19 crisis, Discovery networks’ infrastructure was the fuel to make the goal realized far sooner.

The result? A billion meals achieved to support hungry families most affected by COVID-19, reaching the milestone number in just 18 months.

The awesome job that Discovery and its brands, including Food Network, HGTV, TLC, and Investigation Discovery, did as a collective force of good have inspired audiences with numerous engagement tools, targeted fundraising, strategic advocacy, and volunteer opportunities that empower TURN UP! FIGHT HUNGER to help feed millions still. The work is far from over.

How did Discovery do this?

The campaign aired across the company’s platforms, including HGTV’s A Very Brady Renovation and its mega-hit competition series Rock the Block.

Also, a portion of the proceeds from the home sales in the popular series Brother vs. Brother, starring Drew and Jonathan Scott, was donated to TURN UP! FIGHT HUNGER.

Additionally, Food Network’s Chopped: Grudge Match, hosted by Ted Allen, featured TURN UP! FIGHT HUNGER as a charity supported by the competing judges; and Investigation Discovery shared information on how to help with the loyal ID audiences through their Inspire a Difference campaign.

“By harnessing the impact of Discovery’s combined brands and mobilizing our networks, resources, platforms, talent, and audiences, we are thrilled to share that our Turn Up! Fight Hunger program has helped provide one billion meals to hungry kids ahead of our initial timeline,” said Kathleen Finch, Chief Lifestyle Brands Officer, Discovery, Inc. said in a press release to TV Shows Ace. “There has never been a more important time to help feed hungry kids, and our valued partnership with No Kid Hungry will bring much-needed attention to America’s food insecurity crisis and relief to hungry kids and families in need for years to come.”

“Prior to the COVID-19 pandemic, millions of families were facing hunger—and in its wake, that number increased rapidly,” said Billy Shore, founder and executive chair of Share Our Strength, the organization behind the No Kid Hungry campaign in the same release. “We’re grateful for Discovery’s quick pivot to address the immediate need and for the ongoing partnership that has and continues to help countless families across the country. One billion meals is a significant milestone—but we’re not done yet. Together with Discovery and its audiences, we’re eager to keep increasing that number and feeding as many kids as we can.”

How can I help out?

You can directly impact the text-to-donate campaign where Discovery utilized technology provided by its partner Pledge and directs all donations to support families in need.

And anyone with a mobile device supported by U.S. wireless carriers can text the word “hungry” to 707070 to support TURN UP! FIGHT HUNGER.

Discovery is committed to Reducing Inequality and Supporting Empowerment for underserved populations, fighting for justice and equality, providing access to opportunities to power people’s progress through RISE.

About No Kid Hungry

No child should go hungry in America. But in the wake of the coronavirus pandemic, 1 in 6 kids could face hunger this year. No Kid Hungry is working to end childhood hunger by helping launch and improve programs that give all kids the healthy food they need to thrive. This is a problem we know how to solve. No Kid Hungry is a campaign of Share Our Strength, an organization committed to ending hunger and poverty. Join us at NoKidHungry.org.