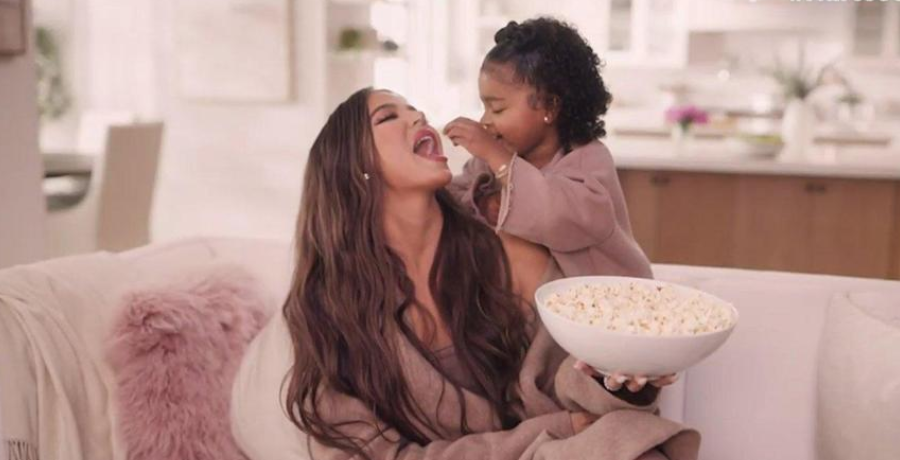 Khloe Kardashian keeps fans guessing with her looks. The Revenge Body star slammed critics who called her an “alien” because of her new Nurtec commercial. The Keeping Up with the Kardashians star is the face of the migraine medication. Khloe’s commercial first debuted in 2020.

Fans did a double-take when she showed off her new look during the commercial. This was around the time that they accused her of getting a new face on an almost weekly basis. Currently, Khloe had to clap back at those who think she looks out of this world lately. It all started when one Twitter troll accused the reality star of going under the knife and said she looks like an “alien.”

One Twitter user felt that Khloe Kardashian looks like an “alien” because of her new look. The 36-year-old took note of that person’s comment. On Monday, June 7, she responded with a clap back of her own. At first, Khloe apologized to the online troll for feeling the way they do.

“Sorry you feel that way,” Khloe wrote. “You have every right to block/mute me. I am trying to help many out there who suffer in silence. I R [sic] completely entitled to your opinions. Just as I am mine.”

@KhloeKardashian has big news for people with migraine! For acute treatment of migraine and preventive treatment of episodic migraine in adults. Don't take if allergic to Nurtec ODT. Most common side effects were nausea and stomach pain/indigestion. PI: https://t.co/wZDdZ9yfXi

The Good American founder noticed the Twitter user’s bio. She added, “I don’t think you should refer to yourself as a feminist if you are attacking a woman unprovoked.”Khloe since appeared in another commercial for Nurtec, a prescription medication used to treat migraines. Khloe has been open about her experience with migraines.

The user wondered if “more plastic surgery” causes more migraines. It didn’t sound like a troll comment. However, the person didn’t sound like they were genuinely concerned either. The intention of the person’s message was to question Khloe’s cosmetic procedures and to note that she looks extraterrestrial these days.

Khloe Kardashian is not having a good week. On Monday morning, she shared an Instagram Story about something that “irks” her. The clip in question was about plastic water bottles. Khloe went on a “rant” about single-use water bottles in several Instagram Stories.

“I see people taking [plastic] water bottles, and they’re just pouring into the gallon-sized reusable plastic bottles so they can consume their water for the day,” Khloe said. “That defeats the purpose because those water bottles are just gonna go in a landfill somewhere and potentially cause pollution and we’re trying to limit our single-usage [sic] of plastics.”

However, the internet noted Khloe’s hypocrisy when it comes to her habits that are not as eco-friendly. She received backlash when she threw a birthday party for her daughter, True, which included hundreds of balloons for the 3-year-old. While latex balloons are biodegradable, they are hazardous to seal life. Khloe also loves her floral arrangements, which also have a negative impact on the environment.

Khloe is really out here trying to shame her followers for using single use water bottles, when every party they throw looks like this (next tweet) 😒😒 This girl is too much pic.twitter.com/tBdqDeGH7U

Some noticed that Khloe’s fridge and pantries contain single-use plastics. She addressed that backlash on Twitter saying that some “people turn[ed] nothing into some thing [sic].” She promised followers that she’s “constantly learning” and “trying to be better for the environment for the sake of my daughter.” Khloe is “always down to learn” and will include more sustainable practices in the future.

What are your thoughts on all the backlash that Khloe is getting lately? Sound off below in the comments.