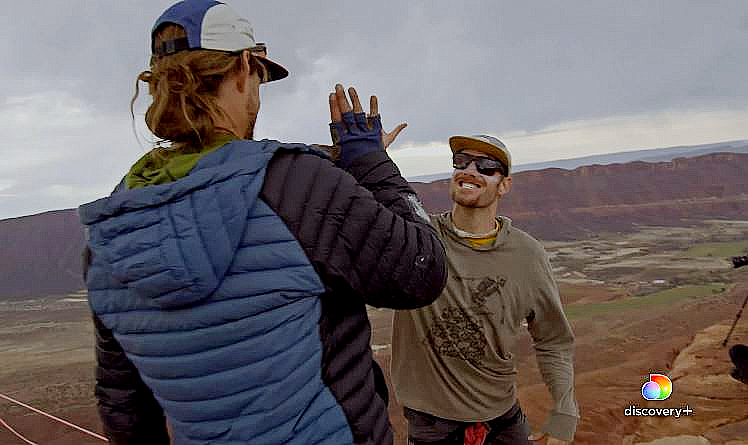 Highline time, anyone? Pushing the Line is the latest reality nonfiction series from discovery+, and you need to understand that this show comes with a warning: Dizzying heights and near-death experiences are about to be witnessed.

And if you have a ripping home theater with a huge screen and sound system and ultra HD clarity, wear your Depends because the camerawork will elicit a physical reaction thanks to drones and Go-Pro cameras’ intimate footage.

A slightly incestuous group of highlining achievers all work, play and search for the perfect spots to do their thing. This is a small cadre of core strength super athletes, all fearless and unflinching kids who have a laissez-faire attitude about life, wardrobe, mortality, and boundaries.

They sleep with each other; they fight, bicker, cook and travel together in the pursuit of the holy grail of highlining.

What the hell is highlining?

So the fun is that the nomadic group stake out the spot, nail in the anchors, and then walk on a line, hundreds of feet above the ground, on a 1-inch rope that’s thinner than your belt.

Highlining is the act of strapping a rope between gorges and canyons and then walking across, tethered, of course. However, that doesn’t mean the highliner can survive if they get stuck in a slacked-out line, as the harness will cut off blood to the legs, and then the body goes into shock, and the person dies dangling.

Or worse, the equipment fails, and it’s kersplat time.

The crew will set new lines or attempt new stunts every week in the best locations in the American West – including Moab’s iconic Fruit Bowl, where a line is strung 500-feet above the desert floor.

The team will also climb the 400-foot Castleton Tower to string lines from one ledge to the next and take on the Colorado Rockies, where they’ll attempt to break the US record with the highest kilometer walk in history.

Why would anyone ever do it?

According to the young kids, highlining is the coolest sport ever (older people rarely do this, except for Nik Wallenda).

This reviewer observed commonalities in the psychological makeup of both the men and the women. Most, if not all, appeared to be the quintessential “wild child” of their respective families. Many likely were diagnosed with ADHD (not confirmed, merely my biased speculation).

They all seemed to love tattoos, saying “dude!” and all have a healthy disregard for the “what ifs” of dying early. Often heard was, “we are all going to die, and I am at peace with this way of dying.” I am not so sure of this. But then, to get to the truth, the person actually has to be recorded mid-fall recanting such bravado.

But I digress. This show is addictive in that you can vicariously live through their hubris and humor. The team is part Grateful Dead traveling troupe, part Nomadland wanderers, and part weekend warriors all rolled up into insanely taut and wiry uber athletes who can flail their arms and keep balance a thousand feet in the air while looking straight ahead as they walk from one end to the other.

There’s no other way to say this; you cannot be fat, unbalanced, and the least bit afraid of heights to do this sport.

Few people will experience highlining themselves. It requires you to be strong physically with incredible athleticism, balance, stamina to walk a long line. But you also must be strong mentally – even just to attempt getting on the line. This all-new series takes viewers inside the world of these fearless athletes, who live every day like it could be their last. What answers are they searching for out on that line? This is an intimate look at what motivates these athletes to risk it all every day.

Two of the cast, Ryan Jenks and Kim Weglin, were the ones who got married on a giant net in Moab, Utah, remember them?

So there’s that aspect of this exhilarating series. The two are reunited for the show, but they are not together.

The show covers 30 days with these heavy-hitters of the sport, including Spencer Seabrooke, Ari DeLashmutt, Andy Lewis, the Godfather who helped invent this sport and appeared with Madonna at the Super Bowl; and Mia Noblet, who holds the world record for the longest walk (for women and men).  On the up and comer list is a group of young, hungry athletes like trickliner Aaron Bray and other personalities looking to put their name in the record books.

You haven’t seen anything like it on TV.  Watch TV Shows Ace exclusive preview: