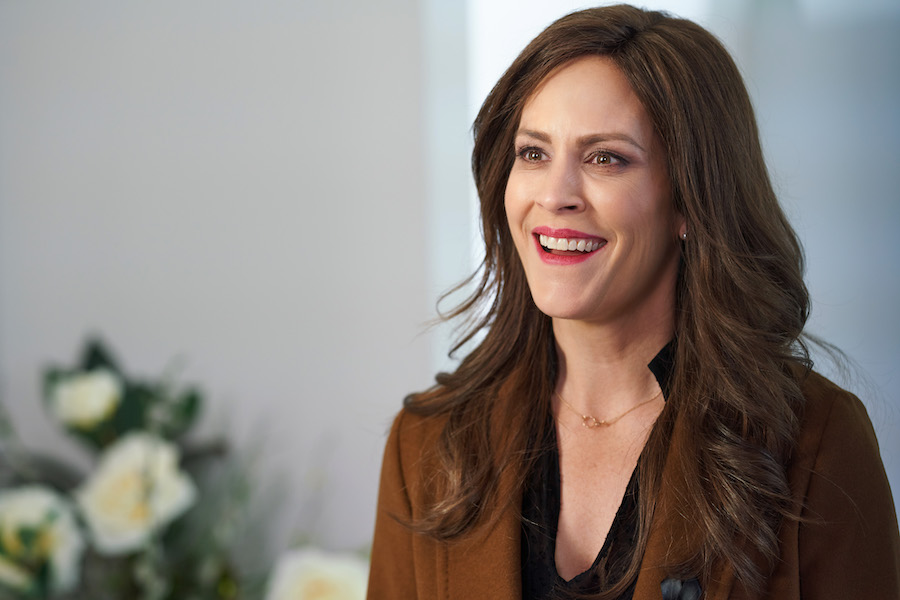 One of the most shocking, recent true-crime stories is the case of the missing mom, Jennifer Dulos. Lifetime is airing two features on the Connecticut mother. The first feature is Gone Mom: The Disappearance of Jennifer Dulos. This stars Annabeth Gish (Mystic Pizza, The Haunting of Hill House), Timothy Paul Coderre (No Easy Days, Soccer Mom Madam), and Warren Christie (If I Only Had Christmas, Batwoman).

But, Lifetime has more. Afterward, watch Beyond The Headlines: The Jennifer Dulos Story. This documentary takes a deep dive into the seemingly perfect family.

Here are all the details.

What is Gone Mom: The Disappearance of Jennifer Dulos About?

First off, the Lifetime movie Gone Mom. This is based on a true story. Jennifer Dulos (Gish) is a wealthy Connecticut mother of five. She mysteriously vanished on May 24, 2019. Where is she?

The movie goes back to the beginning of her relationship with her husband, Fotis Dulos. Jennifer believes she found her Prince Charming in Fotis (Christie). However, by the time of her disappearance, their marriage had all but disintegrated. Moreover, the police found out more details. Turns out, the estranged couple was engaged in a contentious custody dispute.

She disappeared, without a single trace, right after dropping off their children at school. Eventually, the police turned the spotlight on Fotis. He always claimed Jennifer staged her own disappearance ala the film, Gone Girl.

Despite his assertions, investigators focused on Fotis. Subsequently, in January 2020, they charged Fotis with murder January 2020. However, weeks later, Fotis committed suicide. All along, he claimed his innocence.

To this date, Jennifer’s body has still not been found.

What is Beyond The Headlines: The Jennifer Dulos Story About?

Next, is a documentary. According to the Lifetime synopsis, this feature tells the story of a seemingly picture-perfect wealthy Connecticut family. However, the mother of five suddenly goes missing! Eventually, the police point the finger at the most likely suspect, her husband.

Moreover, Lifetime digs into their marriage. This includes how their love broke down. Then, they dive even deeper. Lifetime uncovers hidden aggression. This fear was years in the making. Lastly, the documentary includes the police investigation.

They show the arrest and then cover Dulos’ suicide.

Lifetime Receives The #ReFrameStamp For A Gender Balanced Production

In addition, Lifetime just went to Twitter to announce an important distinction with Gone Mom. They wrote, “The raw story of missing Connecticut mom, Jennifer Dulos, comes to life on-screen in Lifetime’s Original Movie #GoneMom on Saturday, June 5. We are honored to announce that this production has received the #ReFrameStamp for a gender-balanced production.”

What is the #ReFrameStamp? They use this award to promote gender-balanced productions in film and television. The ratio of men to women is how they determine the stamp. Congratulations Lifetime!

The raw story of missing Connecticut Mom, Jennifer Dulos, comes to life on-screen in Lifetime's Original Movie #GoneMom on Saturday, June 5. We are honored to announce that this production has received the #ReFrameStamp for a gender-balanced production❤ pic.twitter.com/hbuqy4opOt

When Can You Watch Lifetime’s Gone Mom & Beyond the Headlines Jennifer Dulos Programs?

Don’t forget to catch Gone Mom: The Disappearance of Jennifer Dulos on Lifetime on Saturday, June 5 at 8 p.m. Afterwards, watch Beyond The Headlines: The Jennifer Dulos Story at 10:03 p.m., Eastern.