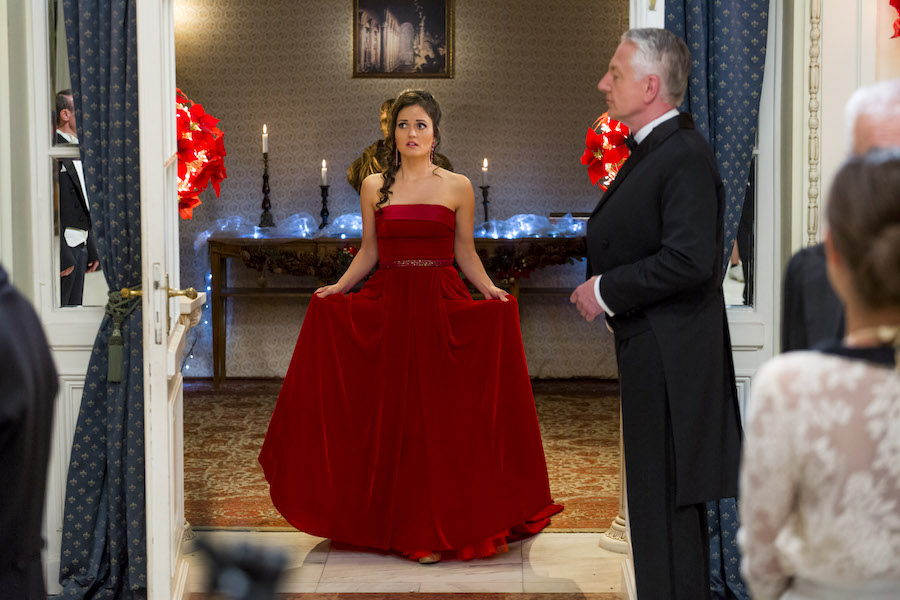 Hallmark’s Christmas In July 2021 promises a cornucopia of holiday delights. Starting off, they are releasing a brand new Christmas movie called Crashing Through The Snow. This stars Amy Acker (Person Of Interest, A Nutcracker Christmas), and Warren Christie (If I Only Had Christmas, Batwoman).

Sounds like Hallmark has thought of everything! Are you ready for a preview of Hallmark’s Christmas In July?

Hallmark Premieres Crashing Through The Snow

Christmas in July will return to Hallmark bringing Crashing Through The Snow, starring Amy Acker and Warren Christie, to the fan-favorite lineup.

Crashing Through The Snow will premiere on Friday, July 10 at 9 p.m. Eastern. According to Deadline, this film centers on Maggie (Acker), who joins her ex-husband Jeff (Kristian Brunn) and his girlfriend Kate (Brooke Nevin) for a Christmas getaway in Aspen. It is there, she meets Kate’s brother, Sam (Warren Christie).

Sounds like a cozy and wintery way to cool down in the heat of summer! However, Hallmark has more in store for Christmas movie fans.

So tune in to watch some of your favorite 2020 holiday movies.

Hallmark has always been the place to see current and former soap stars in Christmas movies. Be sure to check out the Hallmark Soap Sunday, on Sunday, July 18. The network will air holiday films that include a cornucopia of soap stars.

Hallmark fans love to discuss their all-time favorite Christmas movies. Do you have a list? Christmas in July includes a Countdown to Christmas Greatest hits. This will air on Saturday, July 24, and Sunday, July 25.

Here are some of the titles to look forward to:

The Nine Lives of Christmas airs on Sunday, July 25, at 10 p.m. Eastern. In addition, this stars Brandon Routh (The Rookie, Superman Returns), Kimberley Sustad (Christmas By Starlight, Wedding Every Weekend).

For three seasons, Hallmark has released Blake Shelton-produced and inspired Christmas movies. Ready to watch the current three in a row? You can do that on Blake Shelton Night, Monday, June 28.

Time for Me to Come Home for Christmas kicks off Blake Shelton night at 6 p.m., Eastern. This stars Megan Park (My Christmas Love, The Secret Life of the American Teenager), and Josh Henderson (Dallas, Desperate Housewives).

Time for You to Come Home for Christmas is next, at 8 p.m., Eastern. This stars Alison Sweeney (Murder, She Baked, Days of Our Lives), and Lucas Bryant (The Angel Tree, Love Song).

After you are done watching this trio of Blake Shelton Hallmark movies, you can guess which pronoun will be used for the inevitable 2021 Blake Shelton-inspired movie. Maybe it will be “Time For Them,” or “Time For Her/Him”?

Do you love Hallmark musical Christmas films? Then be sure to head over to Hallmark Movies & Mysteries on Friday, July 2 for a collection of musically-themed holiday movies.

On Saturday, July 3, Hallmark Movies & Mysteries will have a Yuletide salute to “those who bravely serve our country. These are stories of those in the service now, those who have lost someone, and those who are finding their way into civilian life. Here are the movies.

USS Christmas is next at 8 p.m., Eastern. Moreover, this stars Jen Lilley (Snowkissed, Days of Our Lives), and Trevor Donovan (Two For The Win, 90210).

Deliver by Christmas is the final movie of the evening, airing at 10 p.m., Eastern. In addition, it stars Alvina August (Zoey’s Extraordinary Playlist, Nancy Drew), and Eion Bailey (Switched for Christmas, Once Upon a Time).

Hallmark is known for its family movies. For Christmas In July 2021, they are airing several favorites that the family can sit down and enjoy together on July 4th!

My other favorite time of year when we get Christmas movies in July! I can’t wait! We get a new movie too! Thanks @hallmarkchannel ❤️🎄💚 #ChristmasInJuly #Hallmarkies

What About Christmas Waltz?

Christmas Waltz will air on Tuesday, July 13, at 9 p.m., and on Saturday, July 31, at 3 p.m., Eastern, on the Hallmark Channel. Subsequently, #Kempers and fans of the Michael Damian-directed film are still waiting for news on a sequel. Moreover, wouldn’t it be great if they choose Christmas in July to make that sort of announcement?

Lastly, Hallmark fans, are you getting excited for Christmas in July?

POstables Finally Get Their Wish: New ‘Signed, Sealed, Delivered’ Movie Will Start Filming Soon At Hallmark
‘Outer Banks’ Season 2: When Is It Coming To Netflix?
‘Extreme Sisters’ Anna and Lucy DeCinque Engaged To Their ‘Prince Charming’
Mama June Shannon Gets Once-In-A-Lifetime Opportunity
‘Zoey’s Extraordinary Playlist’ Canceled: Can It Be Saved?