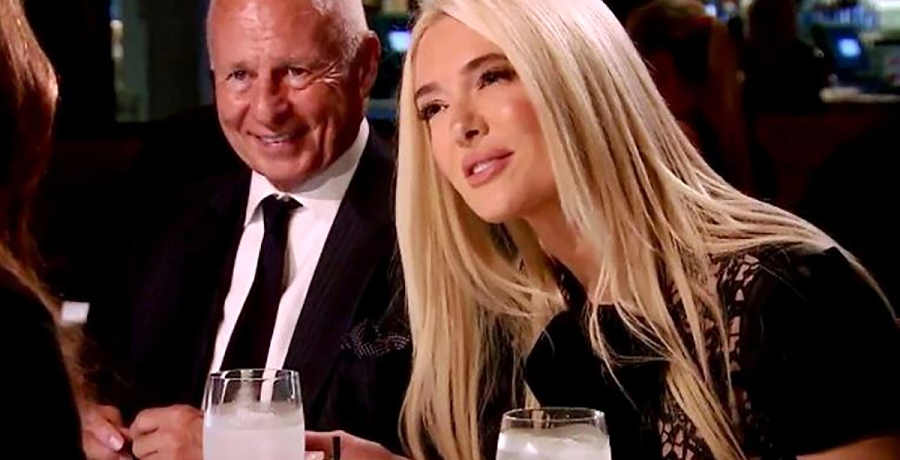 The Real Housewives of Beverly Hills Season 11 will address Erika Jayne and Tom Girardi’s divorce. It’s slowly been rolling out. Currently, the cast is on a group trip to Lake Tahoe. Wednesday night’s episode showed the Housewives taking in the surroundings and having a good time at a restaurant. It was also focused on Sutton Stracke’s argument with Crystal Kung Minkoff.

In a preview at the end of the episode, Kyle Richards looks at a group text in shock. She FaceTimes her costars Lisa Rinna and Dorit Kemsley. All three of them learn about Erika’s sudden divorce from Tom. Earlier on in that episode, Erika was gushing over the attorney.

For the next episode, Erika Jayne and Tom Girardi’s surprising divorce becomes the main storyline. Kyle Richards immediately wants to know more. Like Kyle, Rinna and Dorit are surprised to learn of the news. None of them had any inclination that Erika was planning to divorce her man.

“What is going on? Do you have any idea?” Dorit asked Kyle who responded, “No idea!”

Rinna defended Erika’s need to keep her divorce a secret. “It’s Erika,” she said. “She had to do it like this. She couldn’t tell anybody.”

Still, Kyle was shocked over the news. “What the hell?” she exclaimed. Erika did not hint about an apparent divorce or trouble in her marriage. On Wednesday night’s episode, she gushed over Tom. She revealed that “one of the things she loves most about” him was that “he lets me be myself.”

However, Erika admitted that she’s a secretive person. She loves to keep things to herself. The Bravo star often keeps her friends on her toes. So, it might not be entirely surprising that she wanted to keep her divorce plans to herself.

RHOBH costar gushed over her attorney husband before divorce

Erika Jayne confessed her love for Tom during the June 2 episode of RHOBH. The women revealed a lot during their Lake Tahoe trip. Just five days before she filed for divorce, Erika explained why she loves her husband so much. It didn’t look like the couple had any issues even during that time.

Erika hasn’t spoken poorly about Tom up to this point. This past week’s episode was filmed on October 29. So it’s interesting considering that Erika didn’t tease anything about her subsequent divorce to Tom. Some would argue that Erika is a smart woman and is aware that the cameras around.

She’ll speak her truth when she’s ready. Erika will not only address the divorce but also the embezzlement case. A class action firm sued the couple in December 2020 for fraud and embezzlement. They allegedly used money meant for the victims and their families of a plane crash to fund their lavish lifestyle.

There will be plenty to talk about this season. The Real Housewives of Beverly Hills airs Wednesdays at 8 p.m. ET on Bravo.

Adam Busby BLASTED For Quints’ Dresses, Fires Back Sassy Response
Wells Adams Will Not Be Taking Over For Chris Harrison
Kim Kardashian Posts Angsty Photos Of Herself For ‘National Daughters Day’
Wait, Kim Kardashian’s Met Gala Hair Cost How Much?
Jinger Vuolo’s New Post Has Fans Worried About Her Kids: ‘Are They Ok?’