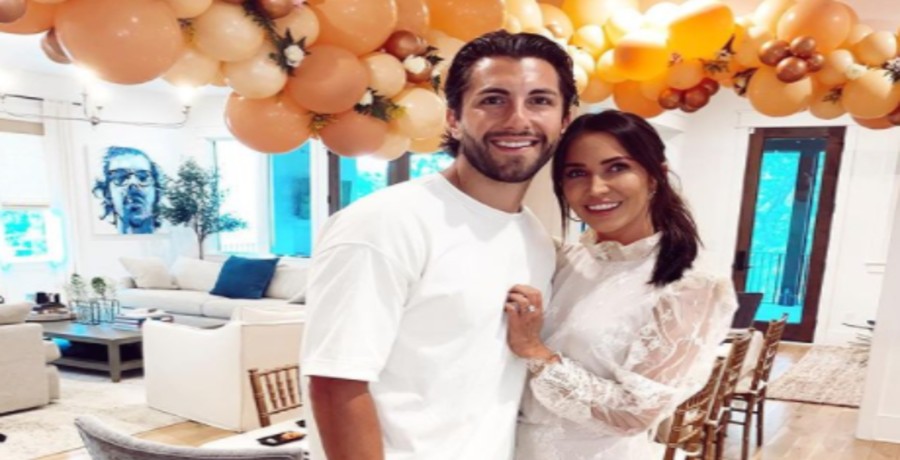 With teasers coming out for Katie Thurston’s season and Kaitlyn Bristowe hosting, fans want all the details. Katie was surprised to get sent home by Matt James on his season. Fans are thrilled she is now getting her chance at love.

Talking to Bachelor Happy Hour, she gave a little information about some behind-the-scenes scoop. She said they were watching when the guys came out from a window and got to see all her reactions. The hosts asked the advice Kaitlyn gave Katie about her journey. Bristowe told her not to get caught up in the role of The Bachelorette and what America might want to see. She told her to be her most authentic self and that will help her find a lasting relationship.

Kaitlyn Bristowe said there was one guy who came in an oversized gift box. According to Bachelor Nation, Kaitlyn said, “there a guy in a box, who I don’t even know if we get to figure out who that is by the Rose Ceremony.” She said several men showed up in costumes and some had gimmicks.

The teasers have shown Katie kissing several men on the show, so she’s definitely leaning into the process. Becca asked about the drama and distractions that have taken place in the past couple of seasons and if Katie’s season is getting back to the basics.

Kaitlyn said she hopes so because she didn’t interact with the guys in the house, so there could have been more drama. Bristowe said the guys seemed like a really respectful group. Kaitlyn also said she sent her a bottle of wine to drink each week as she watches her season. Kaitlyn told Katie she’d fly out to watch with her. She wants her to know she’ll support her through anything. Kaitlyn also shared she isolated herself while her season aired. She said she thinks people watching this season will love to see the female friendships. The hosts were very supportive of  Katie and her journey.

She Also Talked About Her Upcoming Wedding

The hosts congratulated Katilyn on her engagement. Kaitlyn said, “sorry for your loss,” because her fiance Jason Tartick was on Becca Kufrin’s season. She asked Becca if it would be weird when they started dating. She said it wouldn’t be, “as long as you treat him like a king because he’s going to treat you like a queen.”

Kaitlyn also said she wants a Great Gatsby-themed glamourous wedding. She also shared they will choreograph a nice waltz for their first dance.

Katie’s season starts on Monday, June 7 on ABC. What do you think about Kaitlyn’s thoughts on Katie’s season? Comment with your thoughts down below.

Discovery’s ‘No Kid Hungry’ Program Hits Billion Meal USA Benchmark, More Left To Do
Kendra Caldwell’s Family Hides Newborn Baby, But Why?
Which Duggar Courtships Seem To Be In The Works?
‘MasterChef: Legends’: Who Is Curtis Stone?
Jarrod Schulz Wipes ‘Storage Wars’ From Instagram: Off The Show?!