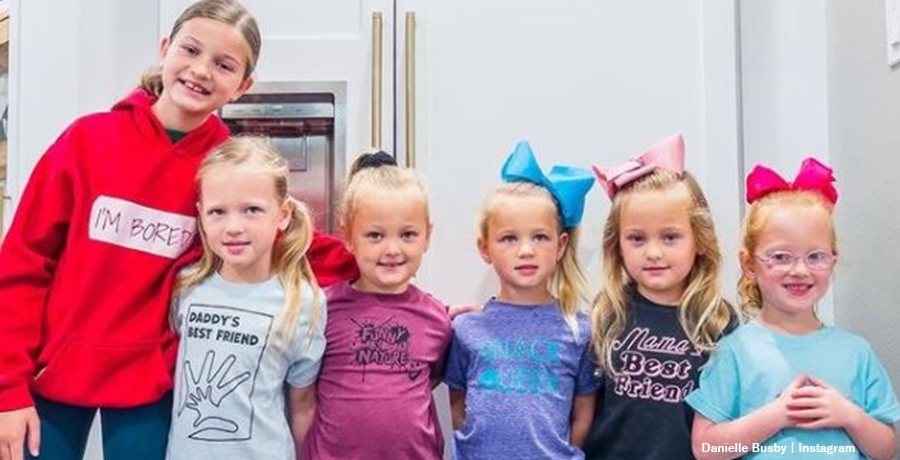 An OutDaughtered family photo appeared on Danielle Busby’s Instagram late on Memorial Day. This year, they posed in the yard in Houston, Texas. It certainly looks like they went all out for it, as the whole family twinned in similar tee-shirts. It’s not clear that they also incorporated an outing as they did in 2020. Perhaps they spent the day chilling in the pool in the warm summer weather.

Before Danielle shared the picture of herself, Adam, Blayke, and the quints, Adam mentioned Memorial Day on his Instagram stories. There, he said that they remember all of those who served and laid down their lives for Americans. Last year, Danielle revealed that they took the kids to see a huge Stars and Stripes flag being put up in a field. Back then, the kids wore pink shots and pale blue shorts. This year, they went a lot further than that. While they might not have gone on an actual outing in 2021, they made up for it with their clothing.

The OutDaughtered family photo came just days after mom Danielle said that Blayke, in particular, looks forward to the summer break. It came on the last day of school in Grade 4 for her eldest daughter. In other posts, she revealed that the kids play and swim in the pool, and they enjoyed a sleepover. Probably, they also plan some sort of vacation this year. Recall, last summer, their home was being renovated so they all went off and enjoyed time camping in an RV. Nevertheless, they took time out of their summer fun on May 31 and posed on the grass in their patriotic shirts.

The post that revealed the OutDaughtered family photo on Monday came with the caption, “Today we remember all those who so bravely fought for our America.” Danielle also added, “❤️🤍💙THANK YOU ❤️🤍💙.” Unfortunately, some celebs posted about a “happy” day and ended up slammed for it. However, Danielle avoided that mistake, although some fans wished them a “happy Memorial Day.”

In the OutDaughtered family photo, The Busbys all wore blue shorts. They also wore white tees. Adam’s said “All American Dad.” Meanwhile, Danielle’s said, “All American Mama.” Likewise, Blayke and her sisters had “All American Gals” on theirs. The quint Riley proudly held up her miniature Stars & Stripes. Even Beaux Dog made it into the picture. He lay between Parker Kate and one of the twins.

What are your thoughts on the Busby family all twinning in their Memorial Day photos? Sound off in the comments below.

Remember to check back with us as we’ll be sure to reveal the next OutDaughtered family photo that the Busbys share. It might come during their summer vacations.