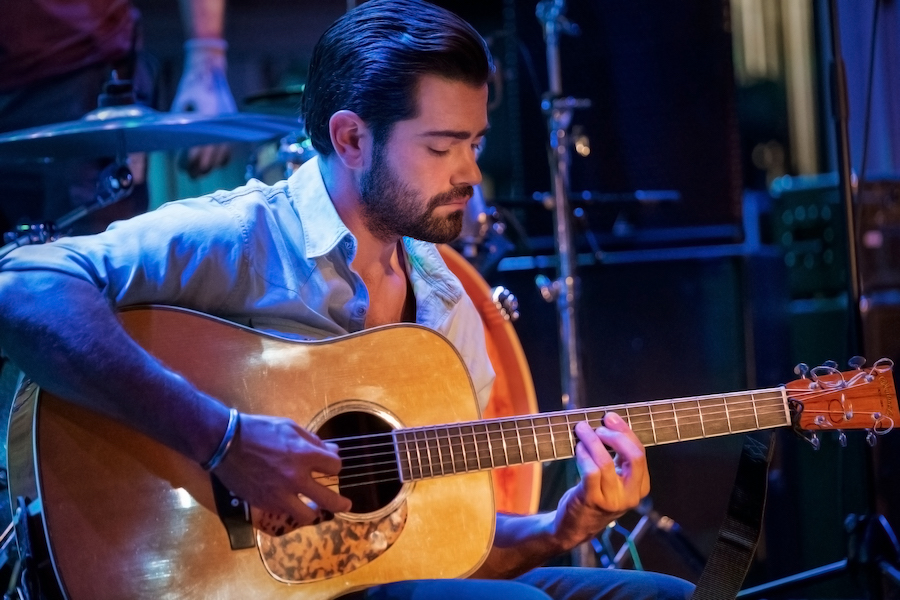 Although Hallmark’s Chesapeake Shores is still filming Season 5, it doesn’t mean that Hallmark doesn’t have a teaser for the series.

What did the teaser promo show and when should Chessies expect to see the new season?

Here Is What The Chesapeake Shores Teaser Promo Reveals

Although Chesapeake Shores has been winding up their Season 5 filming, Chessies know that the original star of the series, Jesse Metcalfe, left early on. However, Hallmark has now released a teaser promo that features the former Desperate Housewives star.

In the 15-second video, we see Trace (Metcalfe) hanging out on the beach, playing his guitar. Next, Abby (Meghan Ory) appears. She walks towards him, as he plays and sings, unaware of her presence.

Then he turns and stands up. He looks surprised. “Abby, what are you doing here?” She breathes, “Trace.” They stand close to each other, but based on the look on her face, it isn’t going to be great news. Abby looks like she is in anguish!

At the end of the short video clip, they show the name of the show and that it is coming in August. We do not have the exact date.

Why Jesse Metcalfe Left Chesapeake Shores At Beginning Of Season 5

Back in March, Chesapeake Shores fans were left reeling when Hallmark announced that Jesse Metcalfe was leaving the series. “A new season of Hallmark Channel’s highly popular scripted series, Chesapeake Shores, is returning this summer. Jesse Metcalfe, who plays Trace Riley, has decided to leave the show. His character’s storyline will wrap up early in Season Five.”

Why was this revelation so shocking? That is because the series was tailor-made for the multi-talented actor and musician. Although the series is based on the books by Sherryl Woods, Trace was more Jesse than the original text.

However, according to Jesse Metcalfe’s Instagram, Metcalfe wanted to leave while “on top.” In this post, he shared a video of his time at Chesapeake Shores, with a caption, “That’s a wrap.”

A fan asked him, “Why are you leaving!?!???” He shared to that fan “and I didn’t like the direction my storyline was going…..” But, the conversation didn’t end there.

The fan asked, “reading the comments makes me wonder where the characters ever going to end up together…or were you not interested in the story heading that way?”

Jesse shared that he did indeed imagine Trace and Abby in a happily ever after scenario. “I definitely wanted our characters to end up together! #trabby”

What Has Social Media Shown On Upcoming Season?

Although Jesse Metcalfe completed his Chesapeake Shores filming early, other stars of the Hallmark series have shared photos. However, newcomer Robert Buckley has not revealed anything about his new role on the show.

Chessies need to wait for the next teaser promo.