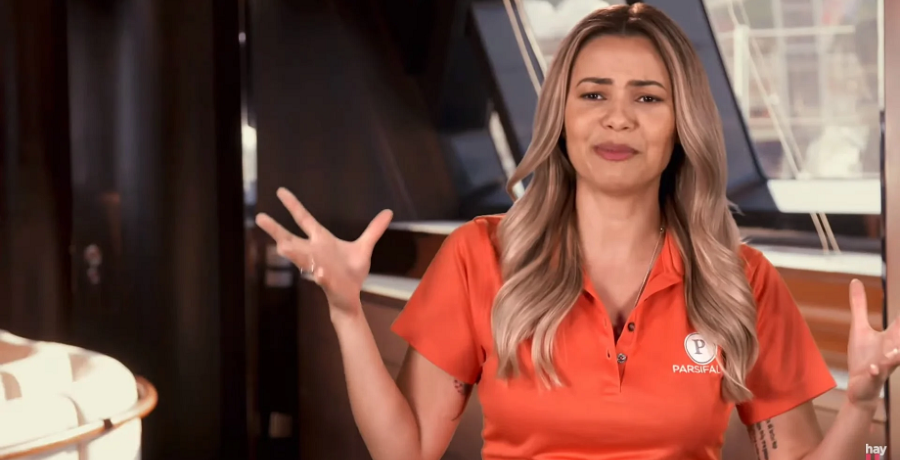 Below Deck Sailing Yacht star Dani Soares makes it clear she wants babies and marriage. That does not help the rumors surrounding her baby. On Saturday, May 29, the former yachtie announced that she gave birth to her first child. Throughout this season, she reveals her desire to become a mom.

From the start, Dani would find herself questioning her life. She wondered how she ended up in the yachting industry and why she was kissing a much younger guy. Still, Dani couldn’t resist Jean-Luc Cerza-Lanaux and the two embarked on their boatmance. The upcoming preview for Monday night’s episode shows she’s ready for marriage and babies.

Dani Soares wants to get pregnant

The Below Deck Sailing Yacht Season 2 midseason trailer already had fans buzzing. It has even more drama than the first half. Dani and Jean-Luc’s relationship continues to unfold. Now that they’re past the brief STD scare, Dani makes it clear that she’s ready to have children with him.

The two did not safely hook up, which led to the STD scare in the first place. Jean-Luc wondered if he contracted chlamydia again. Thankfully, the rash in his pants was from chafing, not chlamydia. Jean-Luc assured Dani he was in the clear, and their relationship continues on Monday night’s episode.

This new preview shows that she’s ready to settle down and become a mother. “OK J.L, I’m moving to America, we’re gonna get married, and let’s have babies,” Dani says as he just smiles. “Let’s do this! You ready?” This isn’t the first comment that she’s made on the show.

In another scene, Dani tells Jean-Luc that if she gets pregnant that night it’s part of “God’s will.” The aspiring nurse tried to keep her pregnancy under wraps. That made it difficult since a fan leaked the news on social media. This led Dani to announce the news herself.

Below Deck Sailing Yacht star was ready to move on

Dani Soares already had her mind set on a new life. In a previous episode of Below Deck Sailing Yacht, she was ready to leave the boat. She was already grieving the loss of her friend and was questioning her life. Dani no longer wanted to waste any second of her life.

She had a breakdown when First Officer Gary King suggested that she and Jean-Luc were doing more than working during the night shift. While he made it clear he was not mad at her, Dani took that as a sign to leave the boat. Then she walked up to Chief Stew Daisy Kelliher and admitted, “I’m having a little breakdown right now.” She confessed in her interview that she doesn’t know how she ended up yachting in her thirties.