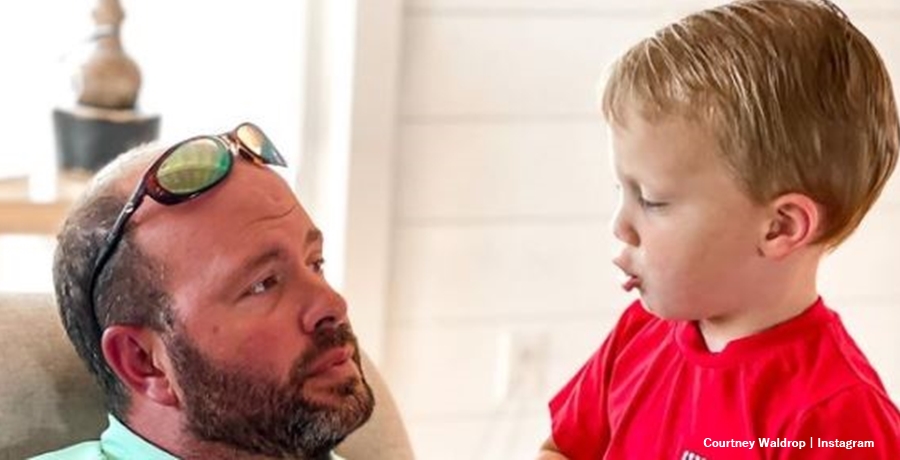 Courtney Waldrop took to her Instagram this week and talked about how Eric sleeps so deeply. In fact, she loves it when he does. Actually, the photo she shared seemed just so cute and funny-sad, that fans couldn’t help reacting to it. Worn out, the Sweet Home Sextuplets dad fell asleep in a very odd place. So, his wife said, “I don’t know if I should laugh or feel sorry for him.”

The Sweet Home Sextuplets dad clearly felt exhausted on Friday, May 28. Eric works on his farm where they raise cattle and sheep. Plus, the TLC dad runs a landscaping and gardening service. Then, he coaches the boy at baseball. Additionally, he helps raise their nine children. Sometimes, the older boys help out with chores, but clearly, he’s likely to feel tired after milking the cows. One time, his wife talked about how he sat up with a sickly calf the whole night.

Eric Waldrop Looks Like This After Milking The Cows?

Courtney Waldrop also sounded very excited as recently, Eric arranged for huge piles of sod. When they arrived, the little sextuplets thought that it made for a fun playground. However, she noted that her husband plans on laying the sod. So, “no more dirt!” However, it probably adds one more exhausting task to his life at the moment. Nevertheless, his wife loves watching him when he sleeps, as evidence by quite a lot of photos she shares on her social media.

Courtney Waldrop and Eric probably are not alone in combating exhaustion. More than being a dad, if you ever worked on a farm, then you know it takes a lot of hard work. Early mornings, late nights, and heavy physical labor take their toll. Actually, according to nfwm.org, “In addition to physically demanding labor and dangerous machinery, heat and sun exposure make agricultural work especially dangerous.” Dairy workers especially work long days and nights, especially during the calving season.

Courtney Waldrop shared a photo that revealed Eric fell asleep on one of the little sextuplets’ beds. In her caption, she explained, “Eric comes in talking to me and sits down on the girl’s toddler beds and says ‘I’m so exhausted I would give anything to have a bedroom and a bed to sleep in.” Next, she saw that he “stretched his big 6ft self out on one of these toddler beds and is sound asleep!!😴”

She also noted that apart from working hard, they still await the completion of their own bedroom. Recall, they refurbish their ranch-style home. So, she hopes that once it’s  “finished our nights will be a little more restful🤪.”

Remember to check back with us often for more news about Courtney Waldrop and her husband Eric from TLC’s Sweet Home Sextuplets.