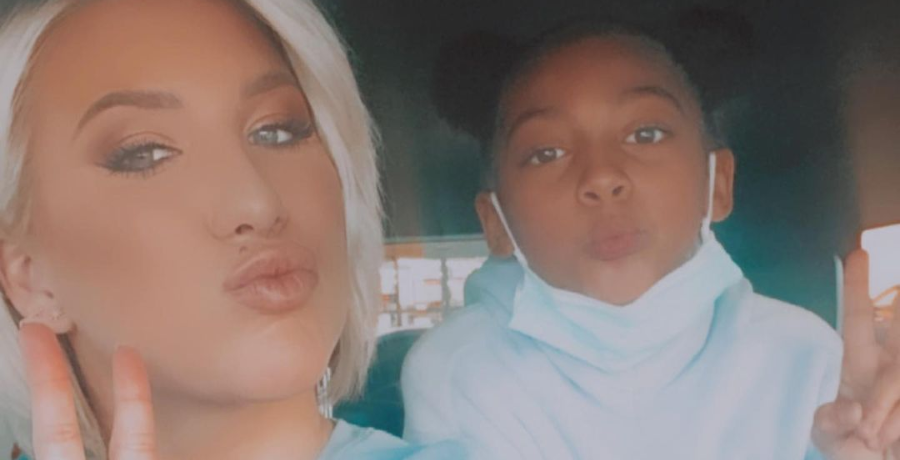 Is Savannah Chrisley getting ready to kiss somebody? The Chrisley Knows Best star left a sultry message on social media. As fans know, Savannah has been single for some time. Last year, she ended her engagement with Nik Kerdiles. The two had an on-and-off relationship. At first, they took things quickly, and they both admitted it.

Suddenly, Savannah and Nik were enjoying their engagement. The young couple decided to slow things down and enjoy the dating period instead. They even admitted that they were in couple’s therapy to work on their relationship. Since then, Savannah has been laying low and focusing on her beauty empire.

Savannah Chrisley gets ready to smooch

On Thursday, May 27, Savannah Chrisley posted a sultry snapshot on Instagram. This time, she wore a blue sweater with a white stripe around the neckline. Her signature platinum blonde hair mysteriously hid one of her eyes. Savannah made it clear that she’s ready to smooch someone.

“It’s time to Pucker Up with @sasssybysavannah for the Summer 😉,” she coyly wrote in the caption before adding, “head to SassybySavannah.com in order to purchase this lip kit!!”

Savannah isn’t kissing anyone in particular. She’s just promoting her Sassy by Savannah cosmetics collection, which has been selling out. Savannah launched her brand around the holidays in 2020. It immediately sold out within the first hour.

Since then, Savannah kept her followers up to date on any restocks and launches. This time, she’s letting them know that they can purchase the lip kit she’s wearing. Savannah swept a pink shade on her pretty pout. The 23-year-old gave the camera a suggestive smile.

This comes after she received backlash for showing off her bronzed skin. The USA Network star came under fire when she shared a photo of herself wearing a Louis Vuitton bikini and tanned skin. Savannah credited her “glow” to the “full face palette” from her beauty line. But some fans think she laid the bronzer on too thick.

This time, Savannah Chrisley got backlash over her looks. One fan told her that she’s “young and beautiful” and that she doesn’t need any more fillers. The user advised Savannah to “Pace herself.” Another noted that her face “is going to melt like a candle” when she turns 40.

“She was beautiful before she started all these surgeries and Botox,” the user continued. “Natural beauty is better!”

However, not all the comments were negative. One fan revealed that they bought Savannah’s lip kit and they love it. Another asked Savannah if her mom, Julie Chrisley, uses her makeup line and if it’s good for older women. Most other fans thought Savannah looked beautiful in the photo.

Savannah is no stranger to controversy, especially when it comes to her looks and love of makeup. What are your thoughts on her pouty new look? Sound off below in the comments.