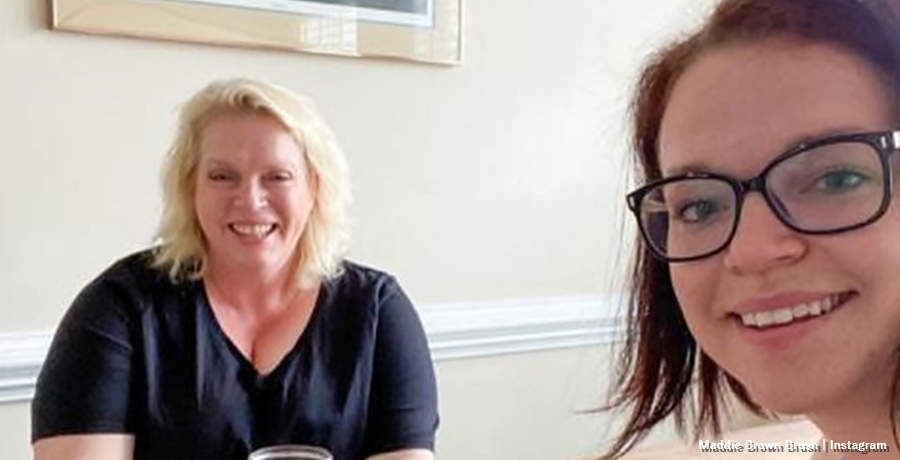 Maddie Brown Brush works hard as a mom and most times, fans see her reveal photos of herself with the kids, Axel and Evie. Occasionally, she shares photos of the family on a Friday. On those days, Caleb also features with them. Now, there’s nothing wrong with being a mom of little kids. However, in a photo this week, Kody and Janelle’s daughter looks less like mommy and more like a hot mama.

The Sister Wives star is more than a mom. Apart from raising her two children, she also runs the house and studies hard. In fact, sometimes, while juggling her duties as a partner and wife, she also finds the time to write exams. In fact, she still hopes for a medical career. Many TLC fans think she’s some sort of wonder person taking all of it on. After all, with two very active kids, it can’t be easy. Additionally, they live far away from the rest of their family now for Caleb’s work. So, it’s not like she can just ring her mom up to do some babysitting for her.

Maddie Brown Brush gave birth to her first baby, Axel in 2017, and these days the four-year-0ld really gets up to all sorts of mischief. In particular, he likes pushing his boundaries in the playground. Then, when Evie-K came along, she dealt with the fact her daughter suffered from FATCO syndrome. Unfortunately, she was born with oligodactyly, which means she has less than five fingers on her hand. Fans know the difficult choices she made about getting a Boyd amputation. So, obviously, as a busy mom, she looks more like a mom than a hot mama most of the time. However, this week, she showed off her curves on Instagram.

The sizzling snap comes on a promo

On Wednesday this week, Maddie Brown Brush took to Instagram. In her photo, she showed her curves off and seems to be feeling her sexiness. Not a day for a mom photo, she clearly feels better about herself in the new photo than one that she posted in January:

In her new post, Maddie Brown Brush wore a bright blue top that showed some cleavage, sunglasses, and a huge smile. She talked about the health and general well-being tonic she drinks daily. Unfortunately, she shut off the comments. We’re pretty certain that if she left the comments up, plenty of Sister Wives fans would compliment her on her hot mama looks. You can see the latest photo below:

What are your thoughts on how good the TLC star looks in the photo? Do you agree she’s looking sexy and feeling it? Sound off in the comments below.

Remember to check back with us often from more news about Maddie Brown Brush from TLC’s Sister Wives.

Is ‘American Pickers’ Co-Star Is Behind Mike Wolfe’s Recent Breakup?
Hannah Ann Sluss Reportedly Suing Proctor & Gamble, But Why?
Was Kim Kardashian Really Under That Mask? Some Don’t Think So
Kaitlyn Bristowe Reveals What It Was Like Working With Michelle Young
Jana Duggar Finally In Love? Fans Discover New Hint