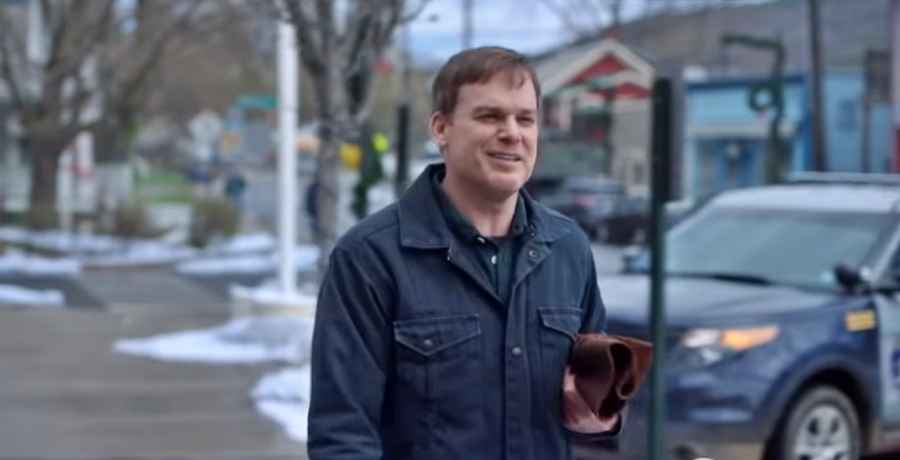 A new teaser trailer for Showtime’s highly anticipated 10-episode Dexter revival features the titular character in the cheery personage of Jim Lindsay. In the clip, our favorite serial killer strolls around town with a huge smile on his face as his neighbors offer him friendly greetings. However, not only is he now Jim Lindsay, but he also has several nicknames, including Jimbo, Jimmy, and Mr. Lindsay. Meanwhile, everything looks peachy until “Jim” walks up to a hardware window and surveys the sharp knives on display.

In the revival, Dexter Morgan now has the moniker Jim Lindsay and is living a cheerful life in a small town. He is now gainfully employed as a sales associate at a fish and game establishment named Fred’s. The latest teaser reveals Michael C. Hall’s character being warmly welcomed by the town’s locals. As he walks down Main Street, one local happily refers to him as Jimbo, while another calls out to Jimmy. Meanwhile, as he passes a group of high-schoolers, they respectfully call him Mr. Lindsay. Let’s face it, these people have absolutely no idea who or what he truly is.

“Jim” has a bundle under his arm, which could be a collection of knives. In fact, he might be looking to purchase some more, as he gazes in the window of a local store. As the camera zooms in, there on display is a collection of sharp knives, perfect for our hero’s true calling.

Showtime aired the first season of Dexter on October 1, 2006, and the popular show ran for eight seasons. In fact, in total, fans enjoyed 96 episodes of the serial killer thriller, starring Michael C. Hall as the titular Dexter Morgan.

As for his character, Dexter is a complicated blood-spatter expert working for the Miami police department. Meanwhile, he also moonlights as a serial killer. The popular serial killer soon became a fan favorite and the show was a hit for Showtime.

The 2013 series finale revealed that Dexter had faked his own death after the death of his sister, Debra. It was also revealed that he was working as a lumberjack in Oregon under a new identity. Fast forward to now and fans are finally getting a treat in the form of a limited, 10-episode revival of the show.

Where does the Dexter revival pick up?

The revival show picks up 10 years after Dexter went missing in the eye of Hurricane Laura. The reboot sees his character, now known as Jim, living in a small town a world away from Miami. Besides, Hall, the show stars Clancy Brown as the primary antagonist, along with Alano Miller, Julia Jones, Jack Alcott, Johnny Sequoyah, Michael Cyril Creighton, Oscar Wahlberg and Jamie Chung.

When the news of the revival was first released in January, Hall told ET, that the revival has a lot to do with time passed. He said it was a combination of the scripts and the timing. “I always thought maybe the time will reveal itself when it’s the right time to do it and it did,” he added. Moreover, Michael said at the time that he was excited that it was really happening.

Hall got five straight Emmy nominations for Lead Actor in a Drama Series for the show between 2008 and 2012. In 2010, he won a Golden Globe, alongside John Lithgow. Between 2008 and 2011, the series itself was Emmy-nominated four times for Outstanding Drama Series. From 2009 to 2011, the serial killer drama was nominated for a Golden Globe for Best Series. In 2008, Dexter did snag the Peabody Award.

Readers can watch the Showtime teaser for the Dexter revival here.

Fans are now excited for the Dexter revival to air on Showtime as a 10-episode limited series this fall.