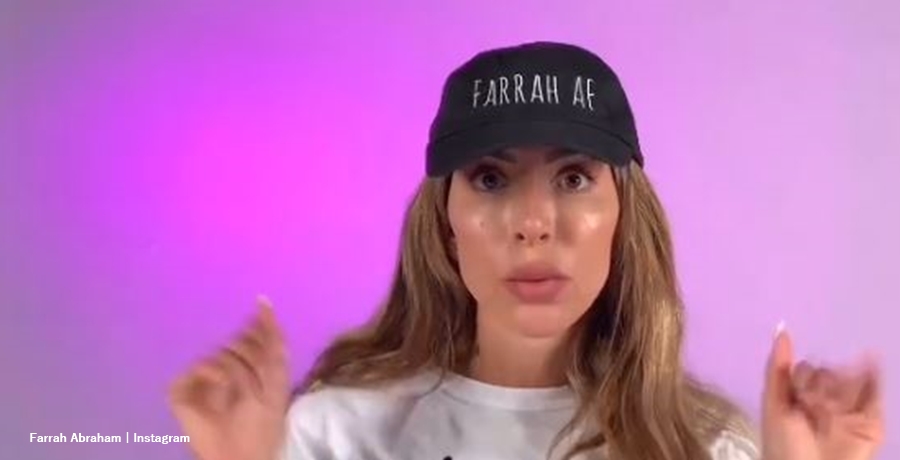 Teen Mom Farrah Abraham made the news recently. Last week, she made allegations against Windsor Mayor Dominic Foppoli, who later resigned. Previously, she opened up about Chrissy Tiegen allegedly encouraging young people to commit suicide. Before that, the MTV alum threatened to take down her Twitter because of the ban on former President Trump. Now, she shared on Twitter that she intends to run for government office. Is it for real?

Farrah Abraham has many aspirations as an influencer

In November last year, the Teen Mom alum popped up with a personal mission to prevent physical abuse of children. Actually, that sounds very noble. Even if you don’t like her, at least she put out a message that sounds sensible. In fact, the basics of her mission aimed at people during the coronavirus all living at home all the time. Obviously, she feared that stressed parents and stressed kids might clash. Do we need to tell you that her reality TV haters mocked and trolled on her?

Farrah Abraham Wants To Put An End To ‘Child Violence’

Farrah Abraham then re-emerged in the tabloids in January this year. The Teen Mom alum threatened to shut down her Twitter account. It came when she objected to the continuing banning of President Trump. So, if she runs for a government position, presumably, it won’t be as a Democrat. Her Tweet said, “If a social platform abuses its power, silences voices, and does this to a world leader – I’m not supporting or wasting further time on the corrupt privately held platform. Wrong is wrong, no spit, hate, or lies make this action ok.” Once again, quite a lot of followers mocked her.

On May 14, 2021, Fox News reported that Farrah Abraham spoke out against Chrissy Tiegen, who allegedly bullied other women and encouraged suicide. According to the Teen Mom alum, she felt “disturbed” as she claimed she’d been a victim of online bullying by Chrissy. Just a week later, the San Francisco Chronicle ran a story about Windsor Mayor Dominic Foppoli who resigned. Naming her as one of several complainants, her attorney said the Mayor allegedly “sexually assaulted her in the Florida town in March.”

Well, trolls might blame Farrah Abraham because of her adult movies, but most people feel it’s never okay to assault anyone. Actually, it becomes clear, from the news items above, that the Teen Mom alum takes a stand against child abuse, sexual predators, online bullying, and big tech censorship. Where is this all taking her? Well, apparently, into government office. And given her age, not just any old office. Notably, her profile on Instagram describes her as an “OG and woman in film alum.” Plus, she describes herself as a “social impact activist.” Additionally, she produced a “Meditation Series and a @nytimes AUTHOR.”

For Teen Mom fans, Farrah Abraham might sound like a joke, but she accumulated 2.6 million followers on Instagram. Add 1 million Twitter followers, and that’s impressive. Additionally, her TikTok nears a half-million followers. Meanwhile, over on Facebook, she gathered 1.5 million followers. That’s a large following, even if many of them might be the same people and haters. Nevertheless, she certainly can call herself a social influencer.

On May 24, Teen Mom fans saw on Twitter, that Farrah Abraham intends to run for government office. Some people think her photo’s photoshopped and call it a joke. Some critics noted that when she said she enrolled at Ivy League’s Harvard, she spelled the name wrong.

In her Twitter announcement, she said that when she turns 30 (May 31), she “WILL BE RUNNING FOR A GOVERNMENT POSITION… COUNT DOWN.”

One Teen Mom critic said about Farrah Abraham, “I think she means elected offices… are open to anyone 18-21 years old (depending on your state).. unless she thinks she’s going to be a senator or governor are the only ones with a 30 year age requirement.”  However, many people simply can’t believe that she’s serious. Some of them thanked her for brightening up their day with the “joke.”

What are your thoughts about Teen Mom alum, Farrah Abraham claiming that she intends to run for government office? After all, with equity and inclusivity on a roll, is there anything to stop her political ambitions? Time will tell, but in the meantime, sound off in the comments below.