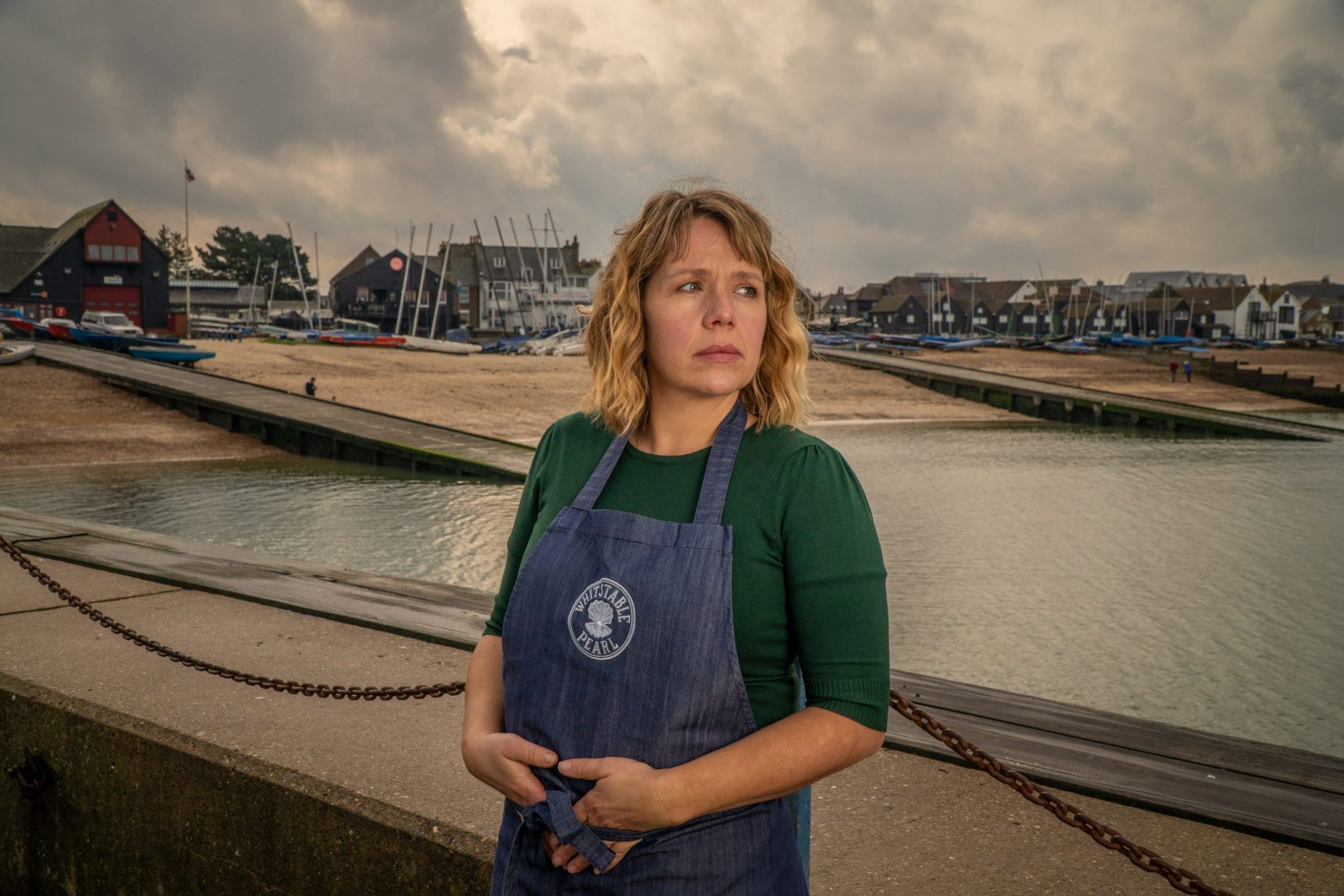 Fans of whodunnit murder mysteries set in the English seaside have a great new series to stream now on Acorn TV. Whitstable Pearl has earned TV Shows Ace spotlight for the scripted pick of the week.

It’s fantastic and not too scary or gory. It is just the right amount of classic British mystery with small-town charm, so make sure to find it and enjoy watching it during the long holiday weekend ahead.

This new British detective drama Whitstable Pearl premiered Monday, May 24, on Acorn TV. The series’ episodes air weekly and the dates and descriptions are posted below.

Based on the much-loved books, The Whitstable Pearl Mystery and Disappearance at Oare by Julie Wassmer, Godliman stars as Pearl Nolan, a local celebrity chef and a novice detective. She has discovered the body of a close family friend and is now investigating what she believes to be murder.

What is Whitstable Pearl about?

When local celebrity Pearl Nolan, chief proprietor of the Whitstable Pearl restaurant, and her newly formed detective agency have discovered the body of Vinnie, a close friend, she takes charge to investigate what she believes to be murder.

The grit in her oyster? Handsome DCI Mike McGuire (Howard Charles) is now on the scene; this new Kent police chief was transferred from the big city of London in an attempt to rewrite his future and leave his past behind.

There’s a connection brewing, as Pearl and Mike clash at first, but then Mike sees what Pearl does, and he believes Vinnie was murdered too. Pearl’s investigation work gains some attention, as the locals are drawn by her caring nature and seek her out to help them solve simple mysteries.

But Pearl finds herself inadvertently competing with DCI Mike McGuire (Charles), and then some collaborative chemistry enters the picture.

The series also stars Frances Barber as Pearl’s outspoken mother, Dolly.  Barber described her character on Whitstable Pearl in a past Q&A:

She said: “I don’t want to give too much away because it is a mystery, and the MacGuffin runs all the way through the six episodes. But Dolly is larger than life. She’s still on Tinder at her tender age. Whereas her daughter Pearl, who runs a PI agency, is rather strait-laced, and Dolly appears to be rather frivolous and a little bit out there, an old hippie, really. But she features very heavily in the story-within-a-story, as the episodes unravel themselves so that she might come across as a little shallow at first. Still, actually, you then realize she’s been covering something up all the way through, as have most people in the series.”

In the Q&A, he described Whitstable as a charming place and acts as another character in the ensemble overall.

“It’s a charming seaside town which, in the context of the series, provides the perfect backdrop for murder, debauchery, and the like. Bad things don’t happen in places like this or to people like this. They happen to other people, somewhere else, somewhere worse. In story terms, Whitstable has secrets, and those secrets are beginning to wash up onshore. Every tide brings a new mystery to be solved.”

The lead writer is Øystein Karlsen, the rest of the writing team includes Mike Walden, Rachel Flowerday, and Alastair Galbraith. David Caffrey (The Alienist, Peaky Blinders, Line of Duty) is the lead director and directs the first two episodes.

The series producer is Guy Hescott and the casting director is Rob Kelly.

Whitstable Pearl explores the dark undercurrents of murder and debauchery swirling beneath the surface of the picturesque English seaside town of Whitstable, famous for its native oysters and buffeted by the prevailing winds and spray of the North Sea. The series if the perfect seaside murder mystery “beach read” turned series, sure to fill leave you questioning what happens next.

Restaurant owner Pearl Nolan discovers the body of her friend and oyster supplier chained to his ship’s anchor. The police, led by outsider Chief Inspector Mike McGuire, believe it was an accident, but Pearl, who also runs a private detective agency, suspects foul play.

Working with local DS Nikki Martel (Sophia Del Pizzo), Mike investigates the death of a diabetic estate agent
force-fed marmalade. When a woman hires Pearl to look into cash left in her mailbox, Pearl discovers Whitstable may have a mysterious benefactor—but are they connected to the murder?

When a recently retired DCI is shot dead during an English Civil War reenactment, Mike immediately suspects the victim’s wife, but she hires Pearl to find out if someone could be targeting her, too. Pearl and Mike plan a date, but a miscommunication puts them at odds.

Pearl agrees to help a woman who received a note claiming her missing husband did not die from suicide. Pearl connects the case to a grief-counseling church group and a drowning years ago. As Christmas approaches, Mike sinks into a depression, despite taking on a new flat in Whitstable.

When a mother takes her daughter out for a boat ride despite the father’s wishes, the boat starts taking on water, and the two need to be rescued. Was it an accident, or were they targeted? Pearl investigates while Mike tries to enjoy his time off from police duty in the days before New Year’s Eve.

Episode 6: The Man on The Blue Plaque – Premiering Monday, June 21

A 30-year-old skeleton washes up on the shore, and the victim has a very personal connection to Pearl. Pearl’s budding romance with Mike is threatened when he identifies a suspect close to home.

Check out the trailer here: