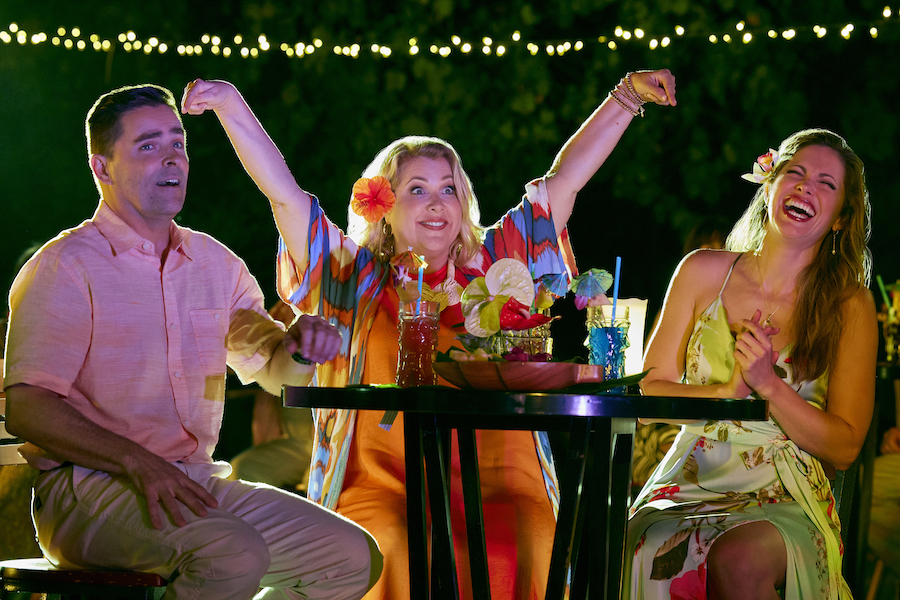 Hallmark fans, are you ready for some sultry new 2021 Summer Nights movies? Here is the preview of the June movies you want to see.

This includes movies with two When Calls The Heart fan favorites trying out a hula dance, some magical realism on an enchanted island, Paris in the spring, and a special seaside town.

Hallmark’s You Had Me At Aloha

Kicking off Summer Nights 2021 is Hallmark’s You Had Me At Aloha. This movie premieres on Saturday, June 5, at 9 p.m. Eastern, on the Hallmark Channel. This movie stars When Calls The Heart stars Pascale Hutton and Kavan Smith.

According to the Hallmark synopsis, when the host of a popular travel show resigns, the network enlists Paige (Hutton), to step in for the next season set in Hawaii. Unbeknownst to her, they have also hired Ben (Smith), who likes to push everything to the extreme. He goes off-script. She is all about doing things by the book.

As these two new co-hosts clash over their opposing ideas for production, they grapple with the fact that not only do they need each other to further their careers, but they also balance each other on and off the screen. Do opposites work?

In this Hallmark movie, you will see the beaches, jungles, and waterfalls in Hawaii. This is an armchair traveler’s dream movie. Pascale says that this movie captures “the exploration of travel.”

Next is Hallmark’s The Baker’s Son. This movie premieres on Saturday, June 12, at 9 p.m. Eastern. This bit of magical realism stars Eloise Mumford and Brant Daugherty.

According to the Hallmark press release, when a ballet dancer visits the small island of Windward, local baker Matt (Daugherty) is enamored. His passion for her somehow finds its way into his baking, transforming Matt’s bread from bland to brilliant. His wondrous new success attracts tourists, boosting the fortunes of the small island community.

However, when the dancer leaves Matt is heartbroken and his bread promptly loses its magic. The townsfolk immediately set about trying to find him a new muse.

Yet, in the process, everyone, including Matt, overlooks the most obvious choice. What about Annie (Mumford), the owner of the local café, and Matt’s best friend and confidant who supported and loved him all along? Can his subconscious love for her ever realize she is the one?

…And that's a wrap!! 🇫🇷🇧🇬 So grateful for this hardworking, talented team. pic.twitter.com/NJgjaMgT0E

Ready for some romance in the romantic city in the world, Paris? Be sure to catch Her Penpal on Saturday, June 19, at 9 p.m. Eastern. This stars Mallory Jansen and Joshua Sasse.

In this movie, event planner Victoria can’t wait to attend, and plan, her best friend’s Paris wedding. But when she finds out that her ex is bringing a date, she reconnects with her French childhood pen pal.

In this story, Stamford real estate development project manager Elli (Michalka) is sent by her company to the quaint, seaside Connecticut town of Sand Dollar Cove.

Her thankless job is to acquire the beachfront property they’ve chosen as the site of their new resort. Brody (Murray), the charming local who holds the deed, has an agenda. He wants to make sure the town’s beloved pier — where many memories have been made over the years — remains intact.

However, things may change. Elli and Brody spend time together while she tries to figure out a way to make the deal work and the undeniable connection between them grows.

This movie is based on the book by Nancy Naigle.

Moreover, fans should expect Christmas In July next!