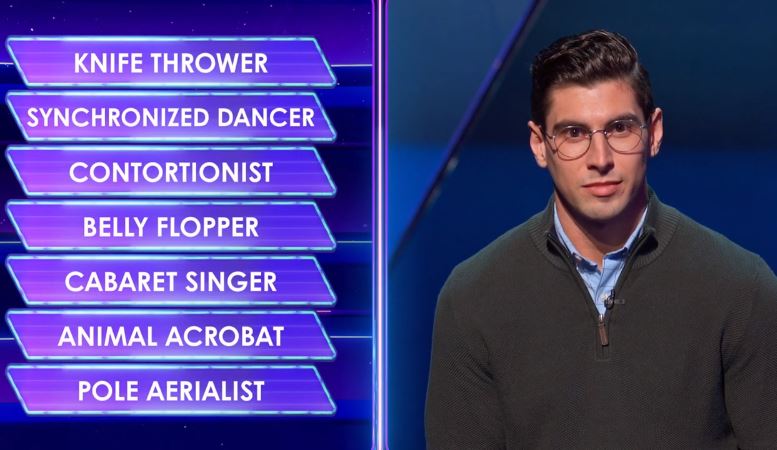 On tonight’s finale of Game of Talents, see if Sean can stump the panel as host Wayne Brady reveals some clues about what Sean does for a living.

Strapping Sean has talent, but what is it exactly?

On the finale of Game of Talents, watch as host Wayne Brady tries to get his contestants Monica and Melanie to figure out exactly what Sean does for a living.

The exclusive clip below features host and executive producer of the show, Wayne Brady, as he shows the clue to the first performer’s talent.

The contestants note that Sean has a rocking set of abdominal muscles in the exclusive TV Shows Ace preview, but what other clues are there?  Brady shows them a headshot, and the imagery provided Monica and Melanie enough of a clue to go on in the competition and play it out.

About Game of Talents

Take a guessing game based on visual clues and amp it up times 100. Then you might have exactly the feeling that FOX series Game of Talents delivers.   Host and EP Wayne Brady has created an energetic spectacle of a large-scale variety show with a clue-centered,  investigative game.

FOX describes this as a new hybrid series. The setup sees two contestants against each other as they attempt to figure out the weird and wacky hidden talents of the mystery performers.

With more than $200,000 on the line, it’s up to the contestants to identify unique skills, including fire dancing, spider wrangling, chainsaw juggling and contortion.

Brady is an all-star performer who has highlighted and starred in some top-rated TV series. Comic and singer Wayne Brady has been seen in Whose Line Is It Anyway? Hosted by Drew Carey, the show featured Colin Mochrie, Ryan Stiles, and other regulars who played improvisational games.

He has been seen in I’ll Fly Away and In the Heat of the Night. In 1998, he hosted the VH1 series Vinyl Justice.

He showed off his sense of humor about his squeaky clean reputation by playing an arch-criminal on Dave Chappelle’s Chapelle’s Show back in 2004.

The season finale of Game of Talents airing at 8/7c on FOX.