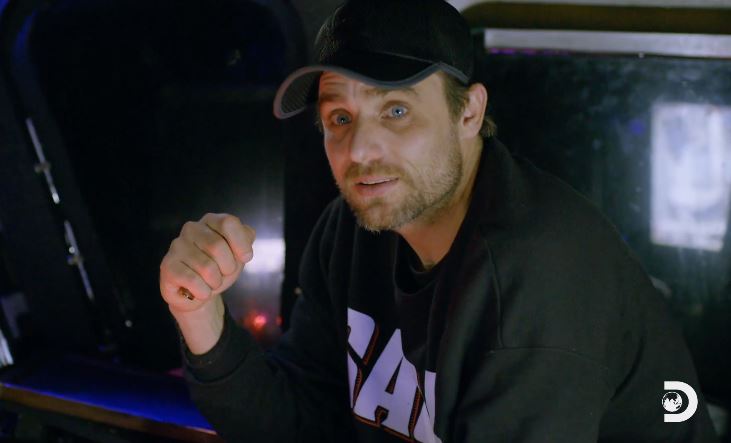 On the next Deadliest Catch, the F/V Saga is in trouble. The typhoon is upon the fleet as the show opened last week with a prayer for the deckhands and the captains to weather the growing storm.

In TV Shows Ace exclusive clip, Saga captain Jake Anderson is worried. He knows something is not right with the boat.

In the clip, Jake senses a problem. He says: “Something doesn’t feel right.” He looks at the cameraman and says: “You feel that? That… right there, right? You feel that?”

There is a strange noise that reverberates from below. It’s not the sort of sound you want to hear out in the Bering Sea when the waves are over 25 feet, and there’s bad weather all around you. The typhoon has a 350-mile radius which means it will touch the entire fleet.

This unsettling noise causes great alarm, as Jakes tells the deckhands to get up and investigate. He says: “You guys check that forward tank. I’m feeling heavy.”

The Saga is top-heavy and vulnerable.

Holding 100 pots on the top deck, Jake explains that the boat is at her most vulnerable when she has these pots on board. Some perspective, the pots are metal, and they clock in at 800 pounds.

He says: “I want to be heavier on the bottom of my boat than I want to be on the top. But if I’m too heavy on the bottom, like if I fill up three tanks full of water, I’m just going to sink.”

The crew confirms his worst fears; there is water in the hull. Jake tells his crew to turn on both the pumps and open both overboard, and start sucking the excess water down as fast as they can.

It’s the roll of the boat in 20+ foot seas that can cause the Saga to capsize and sink.

This episode of Deadliest Catch

Bairdi is a harder crab to fish than King crab. But Jake is sent out to get more King crab while the fleet is trying to get bairdi, and he is in big seas and terrible weather.

Last week, Wild Bill heard a strange noise, too, as the crew investigated. The F/V Summer Bay had a strange mishap in the galley as the fridge lost a door. Bill decided to get out and not tempt fate any further.

At the storm’s eastern edge was the Northwestern. Sig and his crew decided to fish as the boat rolled and the waves pummeled them. His surgical strike on the bairdi crab below was a calculated risk.

Deadliest Catch airs Tuesday at 8 PM, or stream it now on discovery+