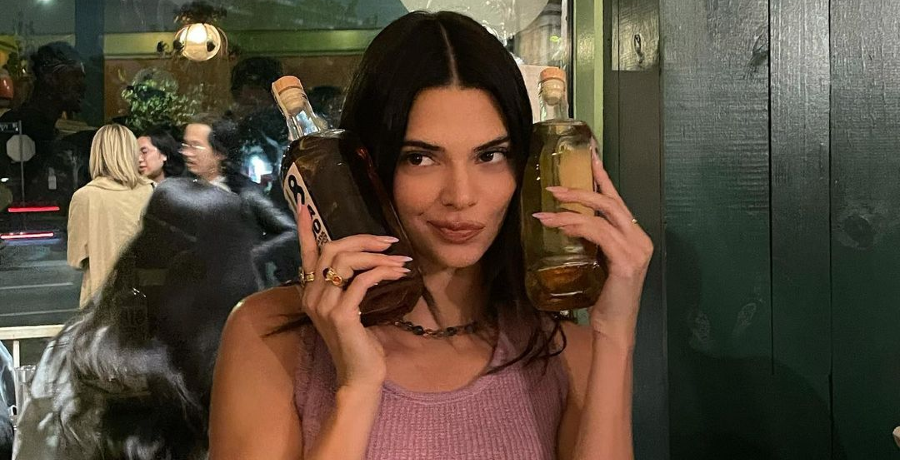 Kendall Jenner doesn’t want to be a reality star anymore. When she became a model, she distanced herself from Keeping Up with the Kardashians. However, that job brought its share of anxieties. Kendall was at the top of the fashion world and then her image decreased over time.

Her contemporaries like Bella and Gigi Hadid eventually replaced her. Now, Kendall is setting her sights on the alcohol industry. The model released her own line of 818 Tequila. Despite the ongoing controversy surrounding her new brand, she cracked opened a bottle and partied with her closest friends and family members.

It was a star-studded event. On Friday, May 21, Kendall Jenner celebrated the launch of her new 818 Tequila brand, which she’s actively promoted on social media. The event was filled with the likes of Doja Cat, Kate Hudson, Katy Perry, Justin Bieber and Hailey Bieber, and Travis Scott. Per Us Weekly, the festivities took place at The Nice Guy in Los Angeles, which is notorious for celebrity sightings and wild parties.

For just one night, the venue transformed into “Kenny’s Tequila.” Earlier this week, Kendall took to Instagram to share photos and clips from the special night. On Monday, May 17 called the launch an “incredible experience” in which she learned about “this beautiful place, its beautiful culture, and the beautiful people!” On Friday night, Kendall was ready to party and down as much tequila as possible.

Guests had their choice of Kendall’s three 818 tequilas:  818 Añejo, Blanco, and Reposado. They also received gift bags that included 818-branded bucket hats and shot glasses. The night also included plenty of games, drinks, and food. Back in February, Kendall shared the news that she’s starting her own tequila brand.

She founded the company after she went on a trip to Mexico with TikTok influencer Hannah Farrell. In October 2020, Khloe Kardashian called Kendall “the tequila queen” in an Instagram post. Rumors swirled that Kendall was getting into the alcohol business. She went on a four-year-long journey that finally led her to “create the best tasting tequila,” Kendall wrote on Instagram on February 16.

People accused Kendall Jenner of cultural appropriation. The 25-year-old model shared the photo and video promo for her 818 Tequila on Instagram. The photoshoot took place on an agave farm in Jalisco, Mexico where she started her new venture. The ad shows Kendall riding a horse and drinking a bottle of tequila in the back of a pickup truck.

In the ad, she wears a cowboy hat with a cotton shirt over a tank top and jeans. Her signature dark brown hair is styled in braided pigtails. Some have called the ads “migrant chic” and “tone-deaf.” Critics think the brand stereotypes Mexican farmers. Some of Kendall’s fans defended the star, claiming that many celebrities have founded their own tequila business.

Meanwhile, a Texas company claims that Kendall’s tequila is too close to theirs. Tequila 512 CEO Nick Matzorkis took to Instagram to share the similarities between his brand and the model’s new tequila offering. He included in the post, “Is that you or did someone copy you?” Shortly thereafter, Nick removed the post from Instagram but was captured by The U.S. Sun.

He clarified to TV station KXAN that he wasn’t accusing Kendall of copying him. He just wanted to “point out obvious undeniable similarities” between their brands. Kendall has yet to respond to the backlash. Instead, she turned off the comments on the Instagram posts that mention her tequila.