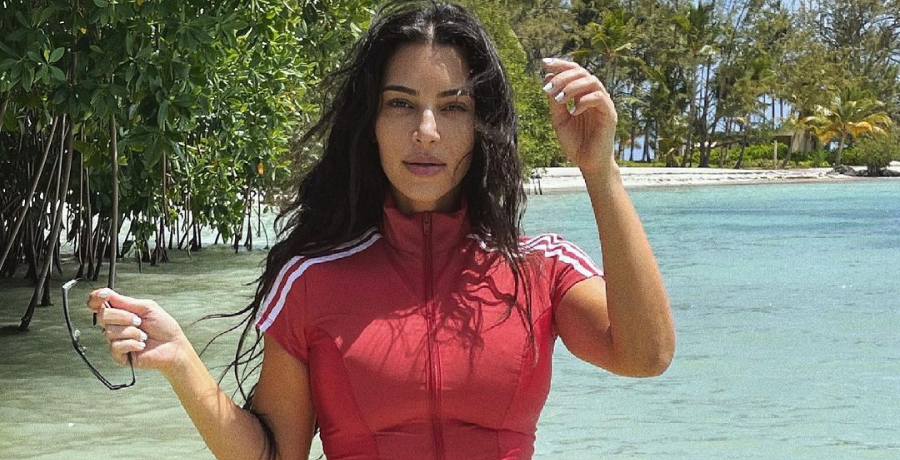 Kim Kardashian was caught wearing the latest Yeezy slides. Does that mean the Keeping Up with the Kardashians star is now speaking to Kanye West? The couple’s divorce is just as strange as their marriage. When they were married, they were living in separate parts of the country.

Ever since Kim filed for divorce, Kanye refuses to speak with her. But that doesn’t mean it’s the end of their working relationship. Kim still works with him on her SKIMs line. She also still has access to the latest Yeezy merchandise.

The reality star tried to distract fans with her latest bikini photo. But they were quick to notice what was on her feet.

Kanye West reportedly didn’t show up to his son’s 2nd birthday party. Kim Kardashian made it clear that she doesn’t care. On Saturday, May 22, she took to Instagram to post a new bikini photo. This time, Kim wore a black, orange, and yellow ombre crop top with a pair of orange bikini bottoms that barely covered her bottom.

“Woke up in paradise,” Kim captioned the photo.

The television personality looks like she’s spending time at a tropical resort in a disclosed location. She paired her superhot look with dark sunglasses and orange slides. Also, Kim wore her signature dark hair in beachy waves. Her hair was tousled over her face and shoulders.

Kim Kardashian thought she could distract fans with her bikini photo. However, they noticed she was wearing the latest Yeezy slides. “Yeezy 450 Slides 🔥,” one fan wrote, to which another added, “how she gets them exclusives when she no longer on speaking terms with yeezy himself?😂”

They didn’t understand how Kim got her hands on these shoes. As previously stated, Kim and Kanye are not on speaking terms. They can’t even come to terms when it comes to co-parenting their children. Another fan demanded that Kim should stop wearing anything Yeezy since she’s no longer married to the rapper.

“Stop wearing Yeezy!” the fan declared. One user noted that “she gets paid for this smh,” meaning that Kim gets paid to promote his shoes even though they’re no longer together.

Regardless of her shoes, fans loved the sizzling photo. Kim didn’t reveal any details as to who she’s with on her tropical vacation. This has led some to wonder if she’s getting back with her husband. Others wonder if Kim is seeing someone else.

Amid the divorce, the KKW Beauty founder has posted many hot bikini photos. She made it clear that she’s one of the hottest divorcees on the planet. Fans are here for “single Kim,” especially with the summer coming. They’re looking forward to seeing how Kim is going to live her life as a single mom.

What are your thoughts on Kim still wearing Yeezy? Sound off below in the comments.