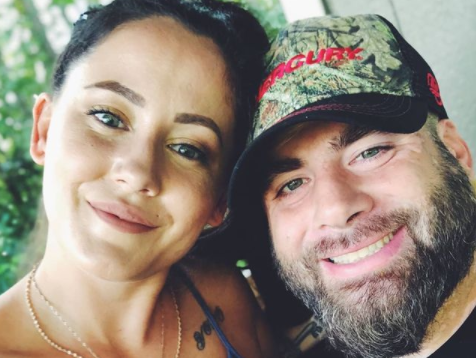 Fans are used to strange rumors and even stranger facts when it comes to former Teen Mom, Jenelle Evans, and current husband, David Eason. Recently, however, fans heard David say something on social media that they just could not ignore.  Apparently, David admitted on social media that he and Jenelle participated in a three-way with one of Jenelle’s baby daddies, Nathan Griffith.

Yes y’all, we made that face too.

Read on to get the dirty details about this alleged three-way.

If you’ve followed this set of reality circus clowns over the last decade, you’re never be surprised when Jenelle and/or David disagree with someone.  Over the years, we have watched the feud between David and Nathan fire up, simmer down, and then flare back up again and again. Unfortunately – both of them share children with Jenelle Evans, which means whether they like it or not – they will be a part of each other’s lives for the foreseeable future at least.

As far as we can tell – these two burly strong men have never agreed on much. Over the years, accusations of affairs and alleged child abuse have been thrown around between these three so frequently that most fans have no idea what actually goes on inside this relationship. This all seemed to resolve itself last year when according to The Hollywood Gossip, Nathan and David seemingly put their differences aside and … started acting like grown a.. — adults.

I swear this was not rehearsed! I don’t even know the words! 🤣🤣🤣🤣🤣💀 @jenellelevans

Back in October 2020, THG reported that Nathan got on a live stream with his 30k strong Insta following and essentially told fans that he and David Eason had been getting along just swimmingly. During the stream, Nathan basically says that while they constantly butted heads over the years, David’s ideals are similar to his own.

In his opinion, while David is ‘more aggressive’ he says he’s a decent guy overall. He muses that Eason gets a bad rap because he doesn’t present himself well professionally. Nathan told the fans that as adults,  the three of them should be acting with more tact.

Ohh That’s Where They Buried The Hatchet?!

Earlier this week, David thoroughly confused & simultaneously disgusted fans during a TikTok live video. On the feed, he very clearly announced that he and Jenelle had a ‘three-way’ with Jenelle’s ex, Nathan Griffin.

While some fans heard that statement and ran with it – David did eventually go on to clarify the situation. During the feed, David touched on the fact that at one point, he and Evans had split temporarily. The conversation turned to the period when Jenelle left Eason back in 2020. During the split – Evans picked up her kiddos and took off to Tennessee for a bit. The pair did eventually get back together. Fans, however, were very heavily insinuating that Jenelle must have been hooking up with Nate during the split.

Jenelle Evans quickly yelled ‘Oh hell no!’ from the background of the video, laughing hysterically. Eason reassures fans that the couple’s relationship is still solid.

“But do you know that when she was in Tennessee, she was telling me how Nathan was acting, so, we three-wayed him,”

Wait, you did what now?!

Fortunately, he VERY quickly figured out the damage his syntax error was doing. The former reality star explained that he was referring to a three-way telephone call rather than intimate group activities.

Apparently, regularly listening in to phone convos between your sometimes wife and your second baby daddy is the epitome of trust in a relationship. Well, at least it’s better than the thought of an actual three-way amongst this motley crew.

Were you as relieved as we were that this was a slip of the tongue? Tell us in the comments!

Stay tuned to TV Shows Ace for all the latest on your favorite reality stars and shows.