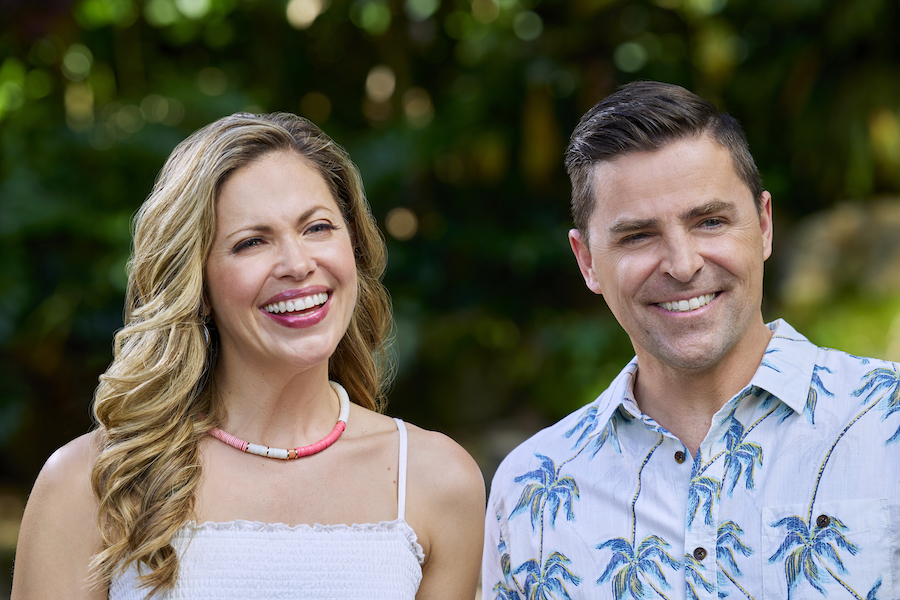 When Calls The Heart fans should be thrilled to know that fan favorites, Pascale Hutton and Kavan Smith, are going to be starring in a new Hallmark movie.  This movie is called You Had Me At Aloha.

The on-screen couple developed this movie, and promise lots of laughs and beautiful scenery. This promises to be a lot of fun.

Here are all of the details

What Is Hallmark’s You Had Me At Aloha About?

Ready to head out to Hawaii with Pascale and Kavan? According to the Hallmark synopsis, when the host of a popular travel show resigns, the network enlists Paige (Hutton), to step in for the next season set in Hawaii.

Unbeknownst to her, they have also hired Ben (Smith), who likes to push everything to the extreme. He goes off-script. She is all about doing things by the book.

As these two new co-hosts clash over their opposing ideas for production, they grapple with the fact that not only do they need each other to further their careers, but they also balance each other on and off the screen. Do opposites work?

In this Hallmark movie, you will see the beaches, jungles, and waterfalls in Hawaii. This is an armchair traveler’s dream movie. Pascale says that this movie captures “the exploration of travel.”

According to the Hallmark On Location video, when Pascale and Kavan first started developing their Hallmark movie, Pascale decided she wanted to be a travel blogger. She wanted to play someone different from her When Calls The Heart character, Rosemary Coulter. Kavan says that her character is a lot of fun to tease.

Kavan, who plays Lee Coulter in WCTH, wanted to play the opposite. He wanted to be the boisterous one.

However, these are not the only differences. This is a romantic comedy. Pascale and Kavan have worked on many movies together, as well as WCTH for eight seasons. While the pair have had funny moments in their work together, this is going to be that much more fun.

When Can You Watch Hallmark’s You Had Me At Aloha?

Be sure to jump onto Twitter on premiere night. Stars from You Had Me At Aloha, and Hallmark will be live-tweeting during the movie. Learn some fun behind-the-scenes tidbits, as you enjoy this Hawaiian romance.

Don’t forget to catch the premiere of You Had Me At Aloha on Saturday, June 5, at 9 p.m. Eastern, on the Hallmark Channel.