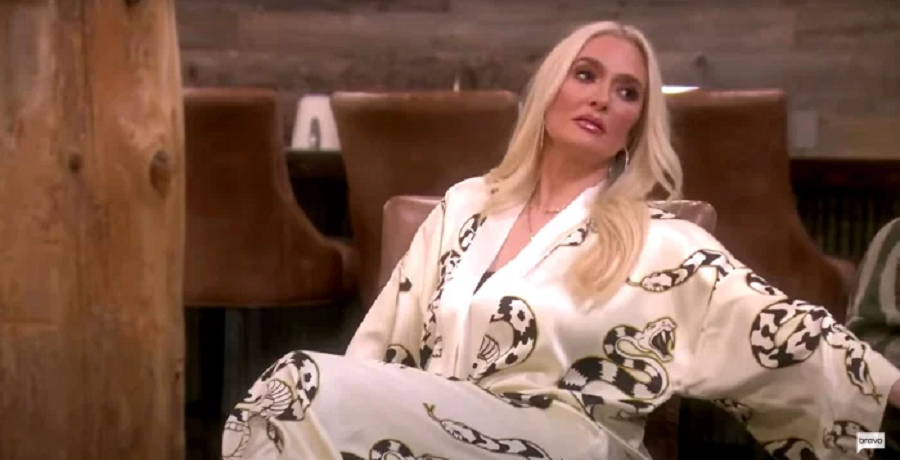 On The Real Housewives Beverly Hills Season 11 premiere, Erika Jayne let down her guard and softened her ice-queen alter-ego. She shared that she had to take care of her mental health amid the coronavirus pandemic. The year 2020 was a difficult one for millions of Americans, including the reality star herself.

Wednesday, May 20 was the Season 11 premiere of RHOBH. Fans have been waiting for this month since it could reveal a lot about Erika and her 21-year marriage. During Dorit Kemsley’s cookout, the cast discussed what they went through during the pandemic. For the first time, Erika showed a vulnerable side of herself and shared something dark that she’s been going through.

Erika Jayne admitted that she had a hard time adjusting to the COVID-19 pandemic. There was a point when she couldn’t get out of bed. The 49-year-old was candid about her mental health struggles. She knew something was wrong and she had to seek help.

“Mine was, like, you know … very dark,” Erika explained her thoughts. “Like, all of us, I’m busy all the time. When I came home from New York, it was really silent. And then, when I didn’t have anything to do, I was walking down the halls of the house and I couldn’t sleep and I couldn’t shake it, this feeling of incredible dread. Who am I if I’m not working?”

Erika started to have doubts about herself. She couldn’t determine her identity without her career. She then revealed that she sought professional help. That’s when Erika said that she “dreaded waking up.” So, she “called a psychiatrist” and she “went on Lexapro.”

Her costar Garcelle Beauvais asked what Lexapro is. Erika said “it’s an antidepressant” and then she laughed and said that “it’s the greatest thing ever.” According to RX List, the prescription medication treats mental health conditions such as generalized anxiety disorder and major depressive disorder. It’s safe enough for adults and children under the age of 12 to use.

In her confessional, Erika Jayne said she didn’t want to see a psychiatrist. She felt that getting help for her mental health struggles meant “that it was a sign of defeat.” There are still days when Erika’s “problems are still there,” but her “attitude toward them is better” after seeking help.

In that same episode, Sutton Stracke said she “stayed in the same bed” for the first eight weeks of the lockdown. Garcelle shared that she felt “so lonely” when her kids weren’t at home. Kyle Richards experienced “anxiety” but was happy to have her family home with her.

Lisa Rinna said she couldn’t “run” from who she was during the lockdown. Erika also admitted that she “was running to.” Erika had a tough few months due to her public divorce from her estranged husband Tom Girardi. In November 2020, she filed for divorce.

Since then, the 81-year-old has been hit with multiple lawsuits. Back in March, Tom was diagnosed with dementia and late-onset Alzheimer’s disease. The RHOBH Season 11 trailer teased Erika and Tom’s divorce and lawsuits in the series. The singer said that she was “going to hold the man’s hand until he died.” Apparently, Erika will continue to open up this season.